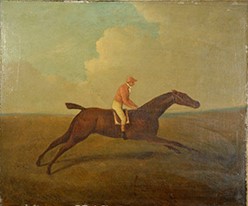 Waxy by Potsos
Oil on canvas, 1790
John Nost Sartorius
Donated by Bob Berger in memory of Si and Vera Berger

Waxy (1790 – 1818) (by Pot-8-Os out of Maria) was a British Thoroughbred and was the leading British sire in 1810. He went on to produce 190 winners including four Epsom Derby and three Epsom Oaks winners.

Pot-8-Os (Potsos), a son of the foundation stallion Eclipse, was dominant during his lifetime. Seven of his sons, including Waxy, out of 11 entries, raced in the 1793 Derby. Waxy's dam, Maria, was sired by the influential stallion Herod and was a distant descendent of the Godolphin Arabian.

Like many horses with friends, Waxy had a rabbit as a stall mate. Also, by the time he was eighteen, Waxy was blind but continued to produce solid offspring for another ten years.

John Nost Sartorius (1759-1828)
John Nost Sartorius was the son of Francis Sartorius and grandson of John Sartorius, both noted painters. John Nost was probably the most prolific of the Sartorius family. He primarily painted portraits of horses, but also specialized in racing and hunting scenes.