A GIFT FROM THE DESERT: THE ART, HISTORY, AND CULTURE OF THE ARABIAN HORSE 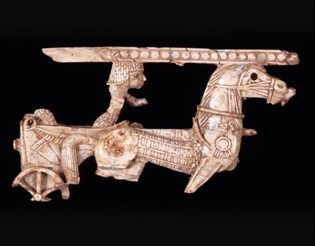 Publications: A Gift from the Desert: The Art, History, and Culture of the Arabian Horse by Sandra Olson and Cynthia Culbertson

The ancient Near East and Islamic cultures made significant contributions to human advancement – from the invention of writing and the wheel to advances in mathematics, astronomy and medicine.

In 2010, the International Museum of the Horse developed and presented A Gift from the Desert: the Art, History and Culture of the Arabian Horse. It was the largest and most comprehensive exhibition ever devoted to the impact of the horse in the cradle of civilization.

The exhibition, presented by the Saudi Arabian Equestrian Federation, featured 409 artifacts and paintings from 28 lenders. The objects represented civilizations and cultures from Egypt, India, Iran, Iraq, Jordan, Qatar, Saudi Arabia, Syria, Tajikistan, Turkey and the U.S. Many of the items had never before left their native countries.

Highlights from the collection included Standard of Ur, the robes and dagger of T.E. Lawrence, an Egyptian 18th dynasty relief fragments depicting horses during the reign of Pharaoh Akhenaten, paintings from famed European Orientalist artists Eugene Delacroix, Adolf Schreyer, Eugene Fromentin, and Vincenzo Marinelli, the Kikkuli Text, and a gold chariot horse from the Oxus Treasure.