THE HORSE IN TRENCH WARFARE 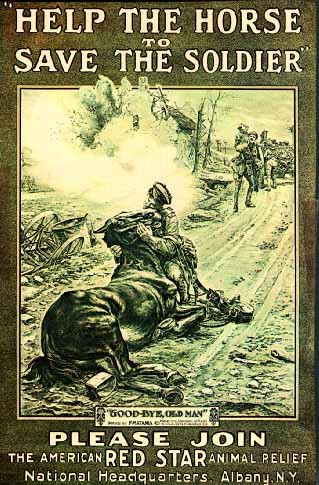 World War I provided a tragic chapter in the history of the draft horse in America. In 1913, the year prior to the war, less than one thousand horses were exported to France and England. Over the next five years, total exportation rose to more than one million. As the conflict was essentially one of trench warfare, light cavalry horses, which numbered over one million, were virtually useless. The primary demand was for heavier horses, which could pack supplies and ammunition, and haul artillery to the front.

When the American Expeditionary Force entered the war in 1917, they took with them an additional 182,000 horses, Of these, over 60,000 were killed, and many thousands were wounded. Only 200 returned to America after the war. From 1914 to 1918, British veterinary hospitals in France treated 2,564,549 horses and mules for war inflicted injuries.