FAY MOORE: A WOMAN ARTIST IN A SPORTING WORLD 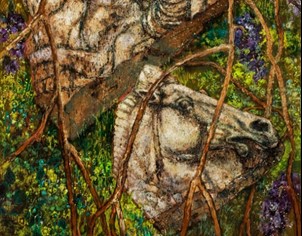 In 1961, Norman Mailer introduced Roger Donoghue to Fay, and they were married in 1964. She started going to sporting events with Roger where she began to sketch football, boxing, and hockey figures, as well as horse racing scenes around the New York tracks. In the sporting arena Fay found her most compelling subject.

This exhibit expressed Moore’s use color and movement to convey the excitement of the horse in sport.