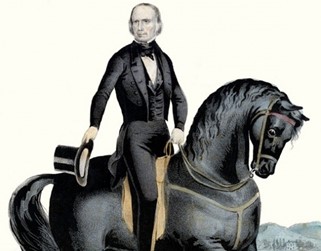 While the world remembers Henry Clay as one of the most significant and effective politicians and statesmen of his day, few realize that he was equally as skilled as a progressive agrarian and stockman. He also had a keen eye for fine horses, in particular Thoroughbreds, and was one of the leaders in establishing the bluegrass region of Kentucky as the nation’s premier thoroughbred breeding center. His offspring would remain prominent in both thoroughbred and Standardbred breeding until well into the 20th century. Henry’s daughter-in-law, Josephine, became the first prominent thoroughbred horsewoman in America. Clay’s son, James B. Clay, almost single-handedly was responsible for introducing trotters to his native state.