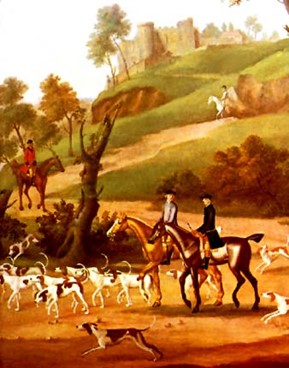 Until the 15th century, stag and boar were the favorite quarries when hunting on horseback in England. As their numbers declined due to deforestation and poaching, there was an increased interest in hare coursing and foxhunting. By the 16th century, women were occasional participants, and it was noted that Elizabeth I, always an avid rider, hunted until she was nearly 70.

The sport of fox hunting in America can be traced back to 1650 when Colonel Robert Brooke brought hounds to Maryland from England. The sport grew to enjoy a great popularity in colonial times. Many of the founding fathers were avid foxhunters. George Washington, who hunted from the age of 16, kept a splendid pack of hounds and blooded hunters for the chase. It is recorded that Thomas Jefferson was an avid fox hunter. Although fox hunting has been pursued in virtually every region of America, it gained its greatest popularity in the middle-south, which maintained many of the traditions of aristocratic England and which had land favorable to the chase. A Kentuckian wrote in 1852: “Fox hunting in the middle and southern states is quite as much a subject of enthusiasm as it has been in England…” Among the most famous hunts in America, the Iroquois Hunt in Kentucky ranks as one of the finest. Founded in 1880 by Roger D. Williams, it is named after the first American horse to win the Epson Derby in England, Pierre Lorillard’s Iroquois.