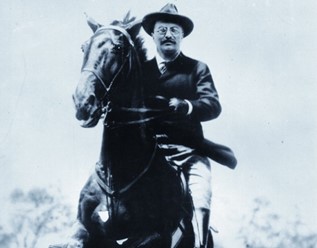 It is hardly surprising that many of our nation's leaders were not only excellent horsemen but were often intimately involved in varying aspects of equestrian pursuits. Many served on horseback in the 18th and 19th century army, some were breeders and trainers while others just enjoyed a long ride on a good horse. These are the relationships that were explored in The Presidents and Their Horses.

Most Americans are familiar with the equestrian exploits of Presidents Washington, Grant, and Reagan. Few however, know that Calvin Coolidge had an electric horse installed in his White House bedroom. During Franklin Roosevelt's administration, the mounted tail of his father's favorite horse hung proudly in the family's quarters. These are just two of the more unusual artifacts that were included in the exhibition.