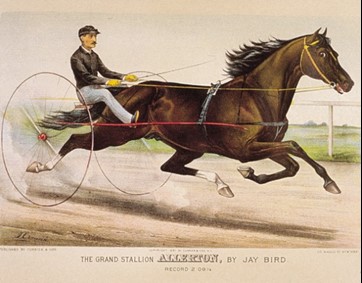 From 1834 through1907 the firm of N. Currier and later Currier and Ives, became the printmakers for the people. During this period they produced, and sold for between five and twenty five cents each, more than ten million reproductions covering more than 7,000 subjects. In addition to their depiction of everyday life, including their famous trotting and other horse prints, they also provided the citizens of the young nation with their only view of many of the famous events of the day. This exhibit presented one of the largest groups of equine themed Currier and Ives prints ever assembled.