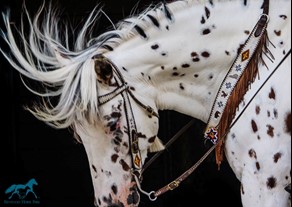 The Appaloosa's colorful ancestry can be traced back to the earliest recorded time, but it is in the American melting pot that the spotted horse established itself as a true breed. The Nez Perce Indians of the inland Northwest deserve much of the credit for the Appaloosa horses we have today. As the only Native Americans known to selectively breed their horses, the Nez Perce desired only the strongest, fastest and most sure-footed of mounts. The influx of white settlers to the Northwest changed the Nez Perce's destiny and nearly destroyed the legacy of their horse-breeding efforts. War ensued when some of the Nez Perce rebelled against imposed treaties. Over several months and over 1,300 miles, the Appaloosa helped the non-treaty Nez Perce elude the U.S. Cavalry in 1877. At the time of Chief Joseph's surrender in Montana, the Army confiscated most of their horses, including Appaloosas. The prized characteristics of the distinctive horse then became lost or severely diluted due to indiscriminate breeding.

Claude Thompson, a wheat farmer from Moro, Oregon, realized the importance of preserving the spotted horse breed and in 1938, he established the Appaloosa Horse Club to promote and restore the Appaloosa?s position in the equine world. The Appaloosa began its return from the brink of obscurity. While the Nez Perce never called their spotted horses "Appaloosas," the breed?s name comes from either the Palouse River, which flows through the region of eastern Washington and north Idaho where the horses were known to be plentiful or from the Palouse Tribe, whose main village was situated on the Palouse River. White settlers first described the colorful native mounts as "a Palouse horse," which was soon slurred to "Appalousey." The name "Appaloosa" was officially adopted in 1938. Today, over a half million Appaloosas are registered with the Appaloosa Horse Club.

Breed Characteristics
Although Appaloosas are most commonly recognized by their colorful coat patterns, they also have other distinctive characteristics. The four identifiable characteristics are: coat patterns, mottled skin, white sclera, and striped hooves. The Appaloosa Horse Club recognizes thirteen base coat colors. It is not always easy to predict the color a grown horse will be from the shade it has as a foal. Most foals are born with lighter colored coats than they will have when they shed their baby hair with the exception of gray horses, which are born dark and progressively become lighter. A remarkable aspect of the Appaloosa is the myriad of color and pattern combinations they can exhibit. The seven common terms used to describe Appaloosa coat patterns are blanket, spots, blanket with spots, roan, roan blanket, roan blanket with spots, and solid. Appaloosa patterns are highly variable and there are many which may not fit into specific categories easily.

The sclera is the white area of the eye, which covers the entire eyeball except the cornea - the colored or pigmented portion. The white of the human eye is an example. All horses have sclera but the Appaloosa?s is white and usually more readily visible than other breeds. Readily visible white sclera is a distinctive Appaloosa characteristic provided it is not in combination with a large white face marking, such as a bald face.

Many Appaloosas will have bold and clearly defined vertically light or dark striped hooves. However, vertical stripes also may result from injury to the coronet or found in association with a white marking on the leg. Also, light colored horses tend to have thin stripes in their hooves. As a result, all striped hooves do not necessarily distinguish Appaloosas from non-Appaloosas.

Joker B was by the foundation Quarter Horse, Red Dog and out of an unregistered mare. He arrived in 1941 with a big white blanket with spots, unacceptable on a Quarter Horse ranch. His versatility was proven on the track and in-hand halter. He produced winning get and in 1965 he was awarded the Premier Sire Award No. 1 by the Texas ApHC. He passed away in 1966, one year after he had again sold at age 24 for $26,500 to a four-man syndicate.

Absarokee Sunset was the result of the breeding of the Appaloosa stallion, Flamingo Of AA to an unknown parentage mare, Powdered Sugar. He was a sorrel colt with a big blanket. He competed and won in halter, Western pleasure, reining, roping, trail and games. He was the first horse to earn the Appaloosa Horse Club Bronze Production Plaque. He sired 449 registered foals, including 64 performance winners, 10 Superior Performance horses, 1 Versatility champion and 15 Bronze Medallion winners. Absarokee Sunset continued producing winning get until he died in 1974 at age 18.

Mighty Bright was the product of careful planning by legendary breeder Lane Hudson. After seeing Bright Eyes Brother, Hudson spent a year and a half seeking the perfect mare to breed to him. Mighty Bright was born in 1960 and was shown only three times as a weanling, winning all three classes. Hank Wiescamp offered $10,000 for the weanling. Hudson knew he had something fine. Mighty Bright?s show career ended as a yearling when he broke his leg. His foal crops surpassed any show career he may have had. He produced an outstanding 189 registered foals including six Bronze Medallion winners. He passed away at the young age of 14.

Prince Plaudit was foaled in 1963 and was out of the public eye until Carl Miles purchased him in 1965 as a replacement for Joker B. Prince Plaudit immediately hit the show ring, amassing Grand Champion titles and Get of Sire wins at most major stock shows from Houston to Denver. He won the Get of Sire class at the National Shows in 1969, 1975, and 1976 as well as the World title in 1975. In 1974, he was syndicated for $300,000.00 with Miles acting as syndicate manager. Prince Plaudit reshaped the breed?s image of the ideal horse. He passed away peacefully in 1988 after a normal day of being escorted around his home at Rimwold Ranch.

Goer, foaled in 1973, was destined to have an exceptional show career. In his weanling year, he won four major crowns. His yearling year followed with more wins. With multiple wins under his belt, his get began to hit the show ring themselves as National Champions. Two, three or four World or National Champions was not unusual at one show. The Get of Sire class at the Nationals in 1980, 1983 and 1984 belonged to Goer as did the National and World Shows? titles in 1985. In 1986, due to a hairline leg fracture, his breeding season was cut short but he was back the next year and continued siring award-winning get until his passing in 1994. In all, he sired 722 registered foals, earning himself the title of all-time leading sire. His get have won more than 48 bronze medallions, two silver medallions and 180 ROMs. He is one of only four stallions to receive the Appaloosa Horse Club?s performance sire award.

1) Provide services for the benefit of its members, which encourage Appaloosa ownership and participation;

2) Foster growth and membership in the Appaloosa Horse Club through promotion, recognition, advertisement, and publicity of the Appaloosa;

3) Charter a regional, national and international network of clubs or associations and provide support and assistance to them in their efforts to promote the Appaloosa breed.

Appaloosas must have at least one parent with a registration classification of Regular registration. The other parent must be registered with the ApHC or an approved breed association. However, stallions or mares that are classified as either N/C, C.P.O., B.S.O., B.S.N., I.D., or P.C. must be bred to a Regular-registered Appaloosa. The following breed associations are approved and recognized by the ApHC:

Horses registered with non-breeding stock papers with an approved breed association are not eligible.

The Appaloosa Horse Club offers a variety of programs for show, racing, pleasure, trail-riding or simply caring for your Appaloosa companion. Newly introduced is the ACAAP program, which recognizes Appaloosas competing in outside all-breed sanctioned events.

The Appaloosa is still ranked overall third in lifetime registrations. With a membership of well over 30,000 and participation in shows, races, trail and distance programs, youth programs and the new ACAAP is booming.