The Most Numerous Draft Breed in America 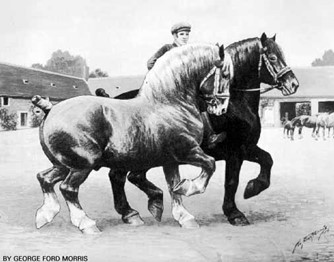 The Belgian originated in the west European lowlands of Belguim. They are direct descendants of the “Black Horse of Flanders”, which existed prior to the time of Julius Caesar around 200 B.C.. In 1866, the first Belgians were imported to the United States by Dr. A.G. Van Hoorebeke. Twenty-one years later, a group of prominent breeders and importers formed what would later become “The Belgian Draft Horse Corporation of America.” After World War I, Belgian breeders were among the first to respond to the American farmer’s desire for a more compact and therefore more economical draft horse. This, combined with the fact that the Belgian was an “easy keeper,” (because of the lack of feathering or long hair on their lower legs) and the preference for their predominant chestnut coloring, resulted in the Belgian surpassing the Percheron as the most numerous of American draft horses in 1937.

As with light horses, modern draft horses are used more and more as pleasure animals. In addition to their limited resurgence in agriculture, today’s Belgian can be found in show rings throughout the country in halter, confirmation and hitch classes, and have also had great success in pulling competitions.