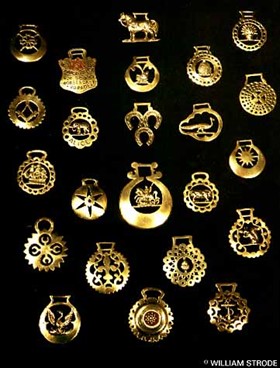 Man has been decorating tack and harness for almost as long as the horse has been domesticated. The original purpose was to bring good luck or to ward off the effects of the “evil eye.” As superstition waned, tack and harness decoration were used more to show off the quality of ones’ horses, and the quantity of the owner’s wealth. Although the exact date of the first use of metallic ornamentation is unclear, it was commonplace at least 2,000 years ago.

The earliest decoration of English draft horse harness occurred in the middle 18th century. This consisted of decorative leather thongs, initials worked into the blinkers, and brightly colored woolen fringe worked around the collar housen. The first brass ornamentation in England appeared towards the end of the century. These were generally placed on the face piece and on the corners of the cart saddle housings. Significantly, these were the same positions where the wealthy of the day displayed their silver crests and monograms on their elegant carriage harness. By the middle of the 19th century, fly terrets (or swingers) became common on heavy horse harness. As the name implies, fly terrets were intended to discourage flies from bothering the horses, especially during the summer. While they were somewhat successful in dissuading flies, terrets also assumed a decorative role during the last half of the century. The use of brasses and fly terrets was most popular from 1850 through 1910 when they were mass produced by either stamping or casting.

English brasses and fly terrets are still produced and used today. The best of these are cast from original 19th century molds and can be seen affixed to the fancy patent leather harness of the world’s great show hitches. The motifs of English brasses and fly terrets generally fall into distinctive types: (1) horses, birds and animals, (2) British royalty, (3) symbolic, (4) commemorative, (5) geometric, and (6) commercial.

Harness bells were a practical necessity on the narrow roads of 18th and 19th century England. On many country lanes, space was insufficient for two vehicles to pass. The warning provided by bells would allow the wagoners ample time to find a wide spot to pull to the side, thus avoiding the difficult task of backing their wagons.

Bells came in three types, rumbler, team, and decorative brass. Rumbler bells are hollow spheres, usually made of brass or iron, which are cast with a small ball of iron loose inside. Their name comes from the distinctive rumbling sound produced by the movement of the horses. Team bells are of the open mouthed, clapper type. Each horse in the team is fitted with a rectangular, leather covered frame that is mounted on the hames. As many as five bells are suspended from the frame. The bigger the bells, the fewer are fitted to the frame. Decorative brass harness bells are generally smaller and are sometimes incorporated into fly terrets. Unlike rumbler and team bells, brass harness bells are intended for show at ploughing contests or in the show ring. Slightly larger decorative brass bells known as chimes are also produced for mounting on the saddle.