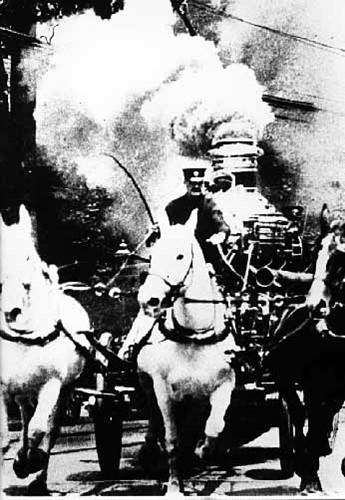 Since the total destruction of Jamestown in 1608, one of the greatest dangers faced by urban Americans has been fire. As cities grew, the magnitude of destruction from urban fires became even greater. With the introduction of heavier and more efficient steam pumpers and ladder trucks in the 1850s, horses became an integral part of urban fire departments. Then as now, speed was essential in fire fighting. Intricate systems were developed to hasten the harnessing of the fire horse teams. When an alarm sounded, stall doors were automatically opened and the horses were moved below their suspended harness. The harness, complete with hinged collars, was then dropped onto their backs and quickly secured by the driver. With a good crew, the entire operation could be completed in around two or three minutes. Fire horses were most always draft crosses selected for speed and strength. In New York City, the first fire horse was purchased in 1832. By 1906, their number had grown to nearly 1500.