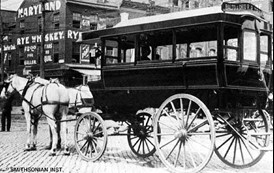 The Draft Horse played a significant role in the growth of urban America. From the end of the Civil War to the beginning of World War I, the United States was in transition from an agrarian to an urban society. As cities, grew, so did the need for mass transportation. The luxury of a private carriage or the regular use of cabs was beyond the means of the average city dweller. Therefore, prior to reasonably priced and effective horse powered mass transit systems, most people were forced to live within walking distance of their work. This severely restricted the ability of the cities to grow.

The developement of draft horse powered mass transit systems allowed the cities to expand into the new suburbs. In 1880, horsecar lines were operating in every city in America with a population of 50,000. By 1886, over 100,000 horses and mules were in use on more than 500 street railways in more than 300 American cities.