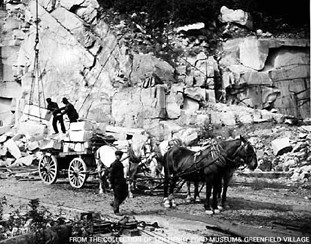 After the discovery at Sutter’s Mill, California in 1849, gold fever swept through the eastern United States. As other valuable minerals were found throughout the West, mining was establihsed as a major new industry. Surface or placer deposits of gold were seldom located on navigable streams, and rich lodes of silver ore were usually found on steep ridges where they had been uncovered by erosion.

As a result, horses were needed to carry supplies to the camps and haul the ore to the railheads. At first, the many mining camps relied on local Indian ponies. In time, these were often replaced by larger and stronger draft crosses.

As ore was extracted from the “hard rock” mines, smelters were needed to separate the rich minerals from the impurties. The vast quantities of charcoal required for the smelting process were procured from local forests. This required strong horses to haul logs from the forest to where they were processed into the needed fuel. Before a mine was played out, the mountains would be stripped bare of trees for miles in all directions.