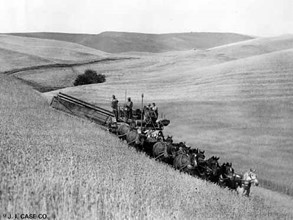 The average American farm in 1790 was 100 acres. This figure more than doubled over the next 60 years. By 1910, 500 acre wheat farms were not uncommon. While oxen and light horses had been adequate for tilling the long-worked fields of Europe and the eastern United States, a stronger power source was needed to work the sticky, virgin soil of the American prairie. As a result, the first European Draft Horses were imported to America in the late 1830’s. Farm labor became scarce due to westward migration and casualties from the Civil War. This created a greater demand for the new farm equipment and draft horses to power them. By 1900, there were over 27,000 purebred Belgians, Clydesdales, Percherons, Shires, and Suffolk Punches in the United States. Although the purebred draft stock was seldom used in the field, the infusion of their blood resulted in a increase of the average horse size to between 1200 and 1500 pounds by 1900.