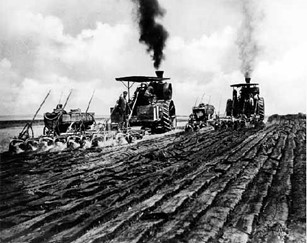 The market for heavy horses went into a steady decline after World War I. The reduction in the number of domestic draft horses, an increased demand for American grain exports, and the improvements in the gasoline powered tractors combined to hasten the replacement of the draft horse by machines. This was especially true of pure-bred draft stock. In 1920, there were 95,000 registered draft horses in America. By 1945, this figure dropped to under 2,000.

Particularly hard-hit were the Clydesdale and the Shire. Both breds had been used primarily in the city, and were affected earlier than other draft breeds. The heavy feathering on the feet of the Shire and Clydesdale was considered a maintenance problem on the farm, therefore diminishing their popularity. What remained of the draft horse market was centered primarily on the farms of the Midwest. The American farmer looked for a smaller, more economical animal. Belgian breeders responded by breeding a more compact horse, resulting in the Belgian becoming the most numberous draft breed in the U.S. by 1937.

By the early 1950’s, registrations for all draft breeds dropped dramatically, with many breeders going out of business. The numbers of Shires and Suffolks dropped so low that in 1985 they were listed as “rare” by the American Minor Breeds Conservancy.