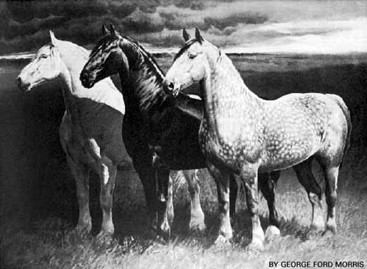 The Percheron is thought to have descended from the “Black Horse of Flanders”, with additional influence coming from the Andalusian and the Arabian after the Moorish invasion of France in 732 A.D.. The Percheron derives from his name from the small French district of La Perche, southeast of Normandy. They were the first of the draft breeds to come to America, and remained the most numerous until surpassed by the Belgian in 1937. Edward Harris imported the first four Percherons to America in 1839. In 1876, the breed’s leading importers and breeders established the “National Association of Importers and Breeders of Norman Horses.” Two years later the term “Percheron” replaced “Norman” in the Association’s name.

By 1910, the 5,338 American Percheron breeders had registered 31,900 horses over the previous decade. Although the internal combustion engine was rapidly replacing the horse on city streets, horses still remained the primary agricultural power source through the 1930’s.

After the second World War, the tractor virtually destroyed the American market for draft horses. As a result, only 58 Percherons were registered in 1954. With the renewed interest in draft horses in the 1960’s, registrations rose to 1,253 by 1982.