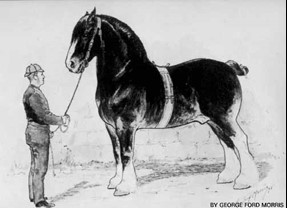 The Shire originated in the east central English counties of Lincolnshire and Cambridgeshire. Although the first Shire was imported to America in 1853, substantial importations did not begin until after the 1880’s.

As the new century began, the Shire seemed poised to challenge the Percheron as the nation’s most popular draft horse. From 1990 through 1911 around 6,700 Shires were registered, with approximately 80% being native bred.

Because of their large size and flashy action, the Shire had been particularly popular in the urban America. By the end of World War I however, the draft horse had virtually been replaced by the truck, subway, and electric streetcar in the city. At the same time, farmers were looking for a smaller, more economical horse to work the fields.

As the Belgian and Percheron came to dominate the midwest draft horse market, the center of Shire breeding moved to the West. Still, their numbers continued to drop throughout the 1940’s and 50’s, with only twenty-five horses registered from 1950 through 1959.

Today the Shire, like most draft breeds, is making a comeback. By 1985 there were 121 Shires registered in America.