The Heavy Horse Bred To Work The Farm 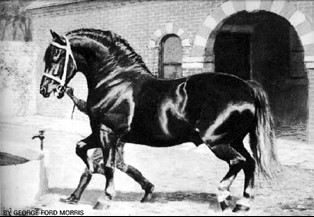 The Suffolk or Suffolk Punch originated in the eastern English countries of Norfolk and Suffolk around 1770. They are the only draft horse bred exclusively for farming. Suffolks stand about 16 hands and are known for their tremendous pulling power, hence the name Suffolk Punch.

Suffolks were first imported to America around 1880. The American Suffolk Horse Association was formed in 1911. The Suffolk never gained wide popularity in this country during the 19th century, partially due to the limited number available from England. During the 1930’s, English breeders exported some of their better horses and the Suffolk’s popularity increased rapidly in the United States and Canada.

By 1953, the drop in demand for draft horses forced the Suffolk Association to legally dissolve with the consent of all members. During the 1950’s the number of American Suffolk breeders dropped to three. In 1961, the Association was revived to represent the eighteen Suffolk breeders in America.

The American Minor Breeds Conservancy designated the Suffold as a rare breed in 1985. Between then and 1990, the number of Suffolks in the United States increased from 150 to slightly over 500. Today’s Suffolk closely resembles its English ancestors, and is still primarily bred to be an efficient and economical farm animal.