Southern Cavalry Superior to the North 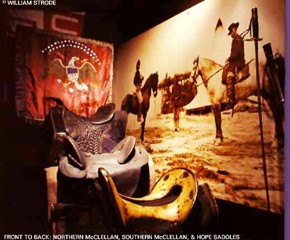 The Civil War was largely a bloody slugging match of infantry and artillery which left 600,000 men dead. The cavalry lent some of the few moments of glory to this otherwise brutal war. The South’s cavalry remained superior to the Union’s for the first two years of the war. The reason for this was threefold: first, in the rural South, boys grew up riding horses, whereas in the North, horses were usually driven, not ridden. Southern cavalrymen, therefore, were better horsemen at the beginning of the war than were their Union counterparts. Second, Confederate policy had cavalrymen supply their own mounts which were vastly superior to the horses of the Union cavalry supplied by the Army. And third, the Confederate cavalry was divided into larger units (brigades and divisions) compared to the small Union cavalry units (no larger than regiments) which were scattered among the infantry. With experience, however, the North improved their organization, training and caliber of horses which drastically closed the gap in quality between the two forces. Also, the leadership of such brilliant generals as J.E.B. Stuart, Wade Hampton, and Nathan Bedford Forrest was matched by such Union generals as Philip Sheridan and James Wilson.

1825 – 1864, John Hunt Morgan
One of the most colorful cavalry leaders of the American Civil War was John Hunt Morgan, a resident of Lexington, Kentucky. In September, 1861, he joined the Confederate army in Tennessee. In April Morgan led a mounted raiding party of 800 men into Kentucky. In 24 days he covered more than 1,000 miles and took 1,200 prisoners. In the summer of 1863, Morgan led a troop of 460 men into Kentucky, Indiana, and Ohio. Each day he and his men spent an average of 21 hours in the saddle. In July of 1863 his exhausted force was finally trapped on an island in the Ohio River. Morgan and his officers were confined in the Ohio State Penitentiary in Columbus. However, in November of 1863, they tunneled out of the prison. The summer of 1864 found Morgan back in the saddle raiding Kentucky. Morgan died on a raid in Tennessee on September 4, 1864, when his troops were surprised by Union cavalry and refused to surrender