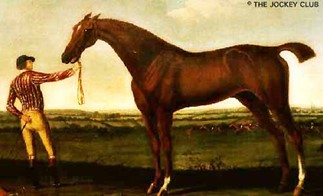 Only one year after the English captured New Amsterdam from the Dutch, the first English governor of New York laid out the first formal race course in America. The new race course was constructed two miles long on Salisbury Plain (later known as Hempstead Plain) on Long Island. In contrast to the dense virgin forest which covered most of the eastern seaboard, Salisbury Plain offered a tract of grass four miles wide and sixteen miles long. Governor Nicolls explained that the purpose of the race course was “not so much for the divertissement of youth as for encouraging the bettering of the breed of horses which through great neglect has been impaired.” To induce competition in the importing and careful breeding of horses, Nicolls offered trophies at the spring and fall meetings.