BUILDING THE ROADS TO SETTLEMENT

The Pioneers of the American West Were Rugged Horsemen 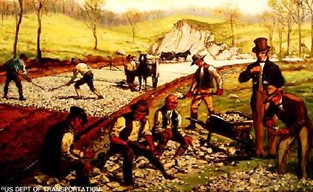 The movement of people and their goods into the interior of America required the construction of roads. The virgin forest reluctantly yielded each foot to construction crews. At first, Indian paths were widened to a size sufficient to allow the passage of pack-horses which carried up to 200 pounds of goods. But it cost a month’s wages (five dollars) to have merely two iron kettles or two sacks of ham and bacon carried 100 miles which was too much for poor settlers. These routes were later enlarged to a width of 12 feet, the minimum size for the movement of wagons. Yet the forest was not the only obstacle impeding travel, since it had allies in the form of high mountains, deep ravines, and rushing rivers.

1755 – The First Roads Were Hacked Out of the American Wilderness
In 1755, General Edward Braddock was authorized to build a military road between Fort Cumberland, Maryland, and Fort du Quesne (Pittsburgh). Even his force of 600 soldiers and axmen could clear no more then five miles a day, and many days they made no more than two miles of passable roads. These first roads were gradually improved by a “corduroy” road of logs laid over swampy portions of the road, but the going remained rough for both man and horse.

Good Roads Smoothed the Way for Rapid Settlement of the American Wilderness
The American frontier was opened up to settlers with the construction of good roads capable of carrying loaded wagons. Beginning at the turn of the 19th century, toll roads such as the Philadelphia and Lancaster Turnpikes (1795), Zanes Trace (1797), the Catskill Turnpike (1802), and the Santa Fe Trail (1822) brought settlers into the American West.

1823 – MacAdam’s Design Improved the Quality of Early Roads
The greatest innovator in road design since the time of the Roman Empire was John Loudon MacAdam (1756-1836). Born in Scotland, MacAdam lived in America during the Revolution. He returned to Scotland following the war to research highway design. MacAdam’s specifications for a proper roadbed required that it contain stones weighing no more than six ounces and no larger than two inches in diameter. The roadbed consisted of several layers of stones uniformly spread and rolled, with a depth of 15 inches at the center. MacAdam’s roads were 20 feet wide, allowing the passage of vehicles from both directions at the same time. Today, “MacAdam” is still a synonym for a hard-surfaced road. The first MacAdam road in America was built in 1823 in Maryland, and the first MacAdam road west of the Alleghenies was built from Maysville to Lexington, Kentucky in 1835 (now US Route 68).

Private Vehicles
The Pleasure Wagon
When roads were constructed between town and farm, a lighter wagon became practical. The “pleasure wagon” had a cantilevered seat on two hickory “springs” while other wagons had no springs at all. Even so, riding in the pleasure wagon would have been far from a pleasure. For farmers who could afford to have such a vehicle and a pair of horses, the pleasure wagon hauled the crop to town and took the family to church on Sunday in good weather.

The One-horse Shay
Some folks drove a one-horse shay on local errands. It was called a “shay” or a “cheer,” after the Yankee rendering of the French word “chaise” meaning chair. It had two wheels, a fixed top, and its body hung on straps. The chaise had two very large strong wheels that could absorb some of the roughness of a corduroy road or span the holes, ruts, and bumps of most other roads. It could be pulled by one strong horse.

The Farmers’ Horse
In the 1700s much of the heavy farm work was done by oxen. The horse was most important for transportation. On the farm, the horse did light work such as hauling snake rails when the men built fences, or pulling a wooden flop rake when the hay was gathered into windrows. When the hay wagon was piled high, the horses teamed up to bring it to the barn. The horse was enlisted to haul the harvest to market, and when all the work was done, the farmer’s horse was often asked to win a race for a wager between neighbors.