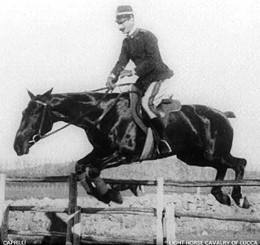 Federico Caprilli (1868-1907) became an officer in the Italian cavalry in 1888 and very soon distinguished himself as a most unorthodox rider, jumping fences in a manner altogether untraditional. Encouraged by General Luigi Berta, Caprilli refined his ideas regarding cross-country riding. In 1894, Caprilli was appointed an instructor at Ror di Quinto, and later became an instructor at Pinerolo, the famous Italian cavalry school near Turin. For riding over fences or cross country, he altered traditional methods of equitation which were used throughout continental Europe. Instead, he devised his idea of the “forward seat.” By 1904, his theory of riding was officially adopted by the Italian cavalry, and cavalry officers from throughout Europe came to Pinerolo to learn his methods.

Caprilli Felt a Horse Should Be Allowed Its Natural Balance When Jumping
The horse should be allowed to jump according to its own instincts and natural gaits. Caprilli advocated a system whereby the rider’s knees and thighs prevented the rider’s seat from ever contacting the back of the saddle. The knees and thighs were to be kept in close to the saddle with heels down, toes up, and the foot turned outwards. The genius of Caprilli’s system lies in the coordinated and sympathetic movements of man and horse. The freedom of his method brought equitation to, quite literally, spectacular heights in the 20th century. Caprilli ranks among the great innovators in the history of equestrian training