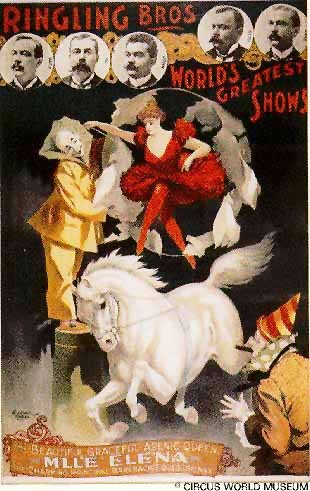 The circus is an exciting American tradition in which the horse has played a prominent role. In the early days, the circus parade announced the coming show. All the horses and rolling stock paraded through the village streets to advertise the animals and performers on the bill.

The Excitement of the Show and the Hard Work of the Circus Both Depended on the Horse
The world of the circus has created excitement for millions. Like everyday life, the world of the circus is both romantic and arduous for man and horse alike. In the early 1900s, the Barnum and Bailey Circus used 750 horses in draft and performance. Ringling Brothers had 650 horses at the turn of the century.
The circus was moved almost exclusively by horses, first from town to town, and later, to and from railroad yards. The dappled gray Percheron was one of the trademarks of the Ringling Brothers Circus. By 1938, the circus was mechanized and the beautiful baggage stock teams had virtually disappeared.

The Show Stealers Have always Been the Performing Horses
The variety of equine acts ranges from sensational feats of acrobatics to clever stunts and the execution of the elegant “airs” from classical equitation. There are no specific performing breeds, since ability alone determines the particular horse used. Most of the horses are stallions and geldings since they tend to be more athletic than mares.
Great amounts of time are spent in training horses to perform moves that are intricate and physically demanding. The owner of an English circus very simply summed up the requirements necessary to train a performing horse: “Patience, understanding, and carrots.”

The American Circus
The American circus grew out of 18th century riding schools. Trick horses and riders and equestrian dramas were the first circus acts. The horse continued to be a main event in all the later circuses.

The great horse, Black Eagle, appeared with the American circus, Howes and Cushing, at the Alhambra in London, 1858. Black Eagle was billed as “The Horse of Beauty.” He could waltz, polka, and stand erect on his hind legs.