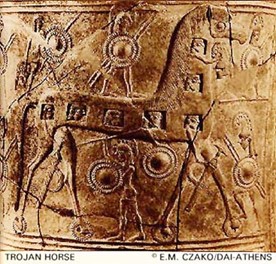 The year 700 BCE roughly marked a turning point in the use of the horse. Chariotry declined rapidly as riding improved and the use of cavalry increased. While chariots retained their popularity in isolated areas such as Britain, in the “civilized world” they were reduced to use as parade vehicles and for racing, first in Greek sacred games, and later in the Roman hippodromes. The types of bits reflect the changed use of the horse. Mouthpieces become more severe, as the braking power of a rider is limited on a saddleless, stirrupless horse. The bits are often studded, but studs on cheek pieces are abandoned, since directional control is more easily obtained on a ridden than on a driven horse