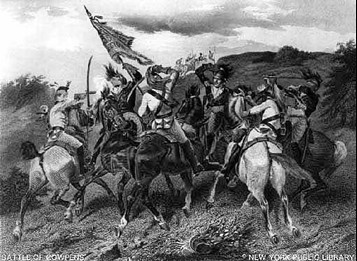 Before the construction of improved roads in the American colonies, both people and goods moved by horseback, as carriages and wagons could not negotiate primitive paths. Even travel in towns was difficult, as demonstrated by the fact that in 1761, Philadelphia – a major center of population and wealth – contained only 38 carriages. It was customary for travelers in colonial times to buy a horse at the beginning of their journey and then sell it once they reached their destination. One real difficulty of colonial travel was the limited amount of goods which could be carried on a pack horse. At most, a pack horse could carry only 200 pounds over a long distance, and therefore, individuals moving from one place to another were seriously limited in what they could bring with them. The inconvenience involved in travel by horseback added to the slow settlement of America’s interior. Once roads were constructed, westward expansion soon commenced in great earnestness.

Horses Were Crucial in Creating an Independent America
The rebel colonists used their own horses in the war, but the British often had to steal theirs since it was very difficult to ship horses across the rough Atlantic from England. The British were particular about the horses they stole, too. One British commanding officer reported that his cavalry troop of some 400 men was, for the most part, mounted on “blooded horses which were quite uniformly kept by gentlemen in Virginia.” Since the British fought in a formal European manner, the success of the outnumbered Revolutionaries depended on swift “hit and run” tactics. Their horse provided the means of surprise, and cavalry forces under the command of men such as “Light Horse” Harry Lee and Francis Marion, “the Swamp Fox,” contributed greatly to the colonists’ victory. At the Battle of Cowpens, for instance, the colonial cavalry cut off the British retreat and only 50 of the original British force of 500 escaped. Since horses represented a military advantage, the British were not kind to captured colonial horses. Reports show that the helpless horses were frequently shot or drowned in rivers to ensure that they would not again fall into the hands of the Patriots. Most historians agree that if the colonists had not had the fast-striking cavalry, the Revolution would have dragged on, perhaps ending in disaster and dashing the hopes for an independent America. 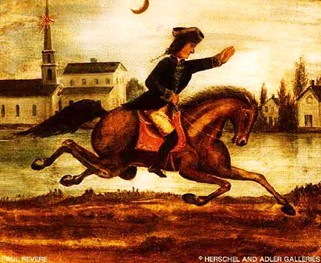 April 18, 1775 – Paul Revere’s Walk
Few events in the history of America have received more attention than the famous ride of Paul Revere on the night of April 18, 1775. Certainly this ride also deserves a place in the history of the horse. Revere was dispatched to warn the Minutemen that British troops were coming to seize their stores of arms in Concord. Revere’s mount was probably a Narragansett Pacer mare, borrowed from Deacon Larkin of Charlestown. Most of us have visions of Revere galloping through the countryside summoning sleeping villagers from their beds. But by Revere’s own account, his ride really amounted to a walk and only occasionally did he spur on his horse. In fact, Revere and Samuel Dawes, another messenger, never reached Concord. They were captured by British sentries on the road to Concord and had their horses commandeered. Ironically, Dawes was captured after falling off his horse. They were told by the sentries to “hoof it” back to Lexington on their own. Luckily for the revolutionaries, Dr. Samuel Prescott – with whom Revere and Dawes were riding quite by accident – rushed on to tell the Minutemen of the oncoming British troops.

Most portraits of George Washington show him majestically mounted on a brilliant white charger. But in fact, Washington’s favorite mount was a chestnut hunter named Nelson -a gift from the Governor of Virginia, Thomas Nelson, Jr. Washington took his horse on many Revolutionary War campaigns. Some of General Washington’s other mounts died from exhaustion carrying him through furious battles. But Nelson survived the rigors of near-starvation at Valley Forge and relentless marches from Boston to the Carolinas. During Washington’s term as first U.S. President, Nelson remained his favored horse. He too remained “first in war, first in peace” – if not first in the memory of history. 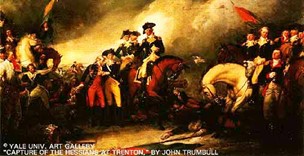 June 1781 – Jack Jouett: The “Paul Revere” of the South
Thoroughbred hunters are noted for speed and endurance. But few hunters could have matched the courage of the horse named Sallie, ridden by Captain Jack Jouett of the Virginia Militia during the Revolution. In what one authority calls “probably the most difficult feat of horsemanship known to history,” Sallie and Captain Jouett saved Thomas Jefferson from capture by the British! At a Virginia tavern in June, 1781, Jouett secretly overheard a British officer discussing a shocking plan. He and his cavalrymen intended to ride the 60 miles to Monticello to capture the Virginia Governor, Thomas Jefferson. As the British force set out on their mission, Captain Jouett proceeded cross-country to Monticello to warn Jefferson. Jouett and Sallie traveled over very tough terrain and the dark night made their ride doubly dangerous. After crashing through dense forest, crossing ditches and fences, and falling twice, they covered the 60 demanding miles in time. Jouett awakened Jefferson, who took to the woods and eluded capture. Captain Jouett forever carried the scars, but he and Sallie joined the gallery of American Revolutionary heroes.