The Spanish Vaquero – The First Cowboy 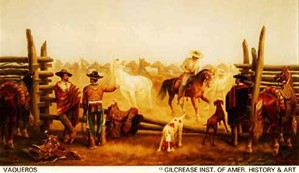 The original cowboys were Mexican Indians, enslaved by Spanish conquerors who put them to work tending the vast herds on their “rancheros.” They wore broad sombreros to protect them from the burning sun and chaparjos (chaps) to protect their legs against cactus and mesquite. Their saddles were fashioned after the “medieval” Spanish saddle with high pommels and cantles. The vaquero’s life was one of isolation, with only a rawhide shelter to protect them from the elements, and a diet consisting primarily of corn mush and any game they could kill with a bow and arrow.

Cowboys in America
The growing population of the eastern United States in the mid-1800s created a market for beef. The construction of the western railroad provided the means of carrying the beef to the east. As a result, the cattle business began to flourish. Cattlemen raised stock and drove them great distances to the railheads. The men who tended and drove the cattle came to be known as cowboys and were as ethnically diverse as the growing nation. With the increasing demand for beef, the cowboy’s domain spread northward to Canada, and westward to the Rockies. The cowboy’s life was often lonely and sometimes violent. His manners, dress, language, and amusements remain a symbol of the rugged independence and determination which characterized the American West.

The Hard Life of the Cowhand 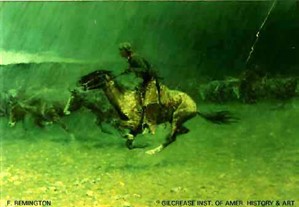 The cowboy’s life was often lonely, with only his sturdy horse for companionship. The early ranges were not fenced, and the cattle had to be watched constantly for fear they might stampede during a thunder storm or when threatened by a predator. Regular chores included cutting out calves for branding and in the earlier days of the range, fighting off the Indians who were protecting their hunting grounds from the white man’s invasion.

In the fall of each year the cattle were rounded up in preparation for the drive to market. The riding and roping skills of the cowboy and the agility and “cow sense” of his horse were especially important in the round-up.

The Trail Drive to Market

The pioneer cattleman, Charles Goodnight, was one of the first men to organize the cattle drive. He also invented the chuck wagon which served as the cowboy’s trail kitchen. Camp life on the trail was often strictly regulated by the ranch owners. Charles Goodnight did not allow his cowboys to gamble, drink liquor, curse, or even play mumbletypeg on the drive. Little wonder that when the cowboy reached the end of the cattle drive and was paid, he often went wild and would squeeze six month’s fun into a few days. 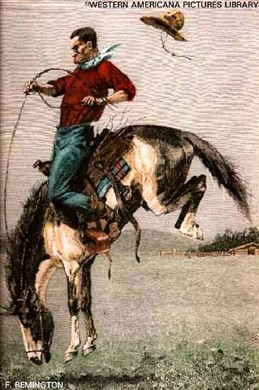 Rodeo (Spanish for “cattle ring”) began as an amusement among cowboys who had reached the end of the long cattle-drive and had to remain with their herds until they were sold. Given a few days of freedom, it was not long before an empty cattle pen was appropriated and one cowhand challenged another to a calf-roping contest, or dared him to ride “the meanest horse between here and the Rio Grande.” The popularity of these informal sports grew until the first rodeo with paid attendance was held in Prescott, Arizona, on July 4, 1886.

At the turn of the century, rodeos combined with the popular “Wild West” show. These events became extravaganzas, including wagon races, bull-riding and steer-wrestling. The Wild West Show soon fell from popularity, but its influences remained in the rodeo, which steadily grew in popularity throughout the western United States and Canada. In more elaborate rodeos, even the cooks got into the act by racing their chuck wagons. One of the most exciting events in the rodeo, bull dogging, was reputedly invented by an African-American cowboy named Bill Pickett. The story goes that Pickett became enraged at a bull which refused to enter a corral. He jumped on the bull from his horse, grabbed its horns and gripped its upper lip in his teeth, bringing it to the ground like a “bulldog.” Today, there are more than 800 formal rodeos held annually. 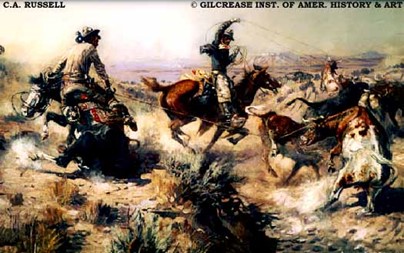