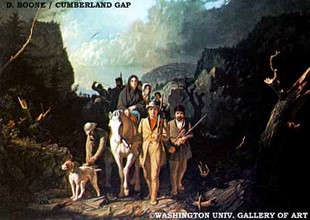 In 1769, Daniel Boone brought pack horses to Kentucky on a hunting trip in 1769, but these were soon stolen by Native Americans. Early settlers came to Kentucky through the Cumberland Gap on foot or by horseback, since the trails were not made wide enough for wagons until 1795. Harrodsburg was settled in 1774 and Boonesborough followed in 1775, with the site of Lexington named the same year. Racing the horses which brought them to Kentucky soon became a pastime of the frontiersmen. The Shallowford race track at Harrodsburg was established in 1775, and used a portion of the straight road from there to Boonesborough as the track. In 1780, the first circular race track was established by William Whitley near his home in Lincoln County, Kentucky. A staunch supporter of the Revolution, Whitley insisted that horses race counter-clockwise, as opposed to the English system of clock-wise.

October 21, 1793 – Hold Your Horses in Lexington
Horses were an important commodity in the early Lexington, Kentucky area. The 1790 Fayette County tax rolls accounted for 9,607 horses and 56 stallions. When arguments arose among early Kentuckians, they were usually settled by a horse race. Races were usually quarter-mile dashes on straight paths or a town street. By 1791, an annual three day race meet was already an October custom in Lexington.

In 1793, street horse racing threatened Lexington’s peace. Therefore, it was proclaimed by the majority of the townsmen that “jockeys racing their horses through the streets” were troublesome. The trustees issued strict orders confining racing to “the lower end of the Commons (West Water Street) where stud horses can be shown.”

Breeding for Quarter Horse Racing
The first evidence of horse breeding in Kentucky is an advertisement for a horse named Pilgarlick which appeared in Bradford’s “Kentucky Gazette”of February 16, 1788. The appearance of another advertisement for Darius reveals the extent of Janus’s influence in the area. Of course, this also reveals that the early Kentuckians were especially interested in raising horses for quarter racing. 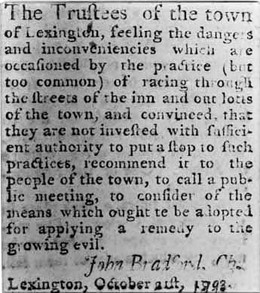 By 1789, a racecourse had been laid out in Lexington. A notice in the “Gazette” of August 22, 1789, announced the running of “heat” races over a distance of three miles to be run in October of that year. Races of an extended distance created a need for Thoroughbred horses. To that end, we find that in 1797 an imported English Thoroughbred named Blaze, foaled in 1786 and imported to Virginia in 1793, was standing at stud in the Bluegrass. With the growing interest in distance racing and a growing supply of Thoroughbred horses, race courses were quickly constructed throughout Kentucky. By the end of the century, there were courses in Georgetown, Danville, Bardstown, Shelbyville, Versailles, Winchester, and Maysville. The future of Kentucky’s eminence as a horse breeding and racing country was obvious.