THE GOLDEN AGE OF THE TROTTING HORSE 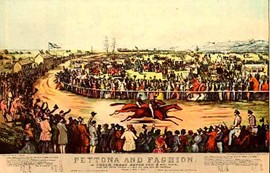 One of the most interesting stories of man and horse is that of William Rysdyk and Hambletonian, the great progenitor of the Standardbred horse. Rysdyk was employed as a farm hand by Jonas Seeley of Sugar Loaf, New York, in 1849. Seeley acquired the Charles Kent Mare, named after her previous owner, a butcher in New York City. This mare had been permanently injured and was used only for breeding. Sired by Bellfounder, she was of Norfolk Trotter ancestry, a breed noted for its smooth gait. Seeley bred his mare to Abdullah, who was a grandson of Messenger, but a mean and ugly horse. The offspring of the Charles Kent mare and Abdullah was a bay colt who was to be a keystone in the future of harness racing.

Rysdyk persuaded his employer to sell him the colt and his dam for $125. Rysdyk named his colt Hambletonian, who soon began to reveal his handsome appearance. Rysdyk showed his beautiful horse to enthusiastic admirers at the local race track in Goshen, New York. At the young age of two, Hambletonian was bred to four mares. As a three-year-old, he was matched against his older half-brother, Abdullah Chief, in his first race at the Union Course on Long Island. Hambletonian won easily. Seeley Roe, owner of Abdullah Chief, wanted another match, and again his horse was beaten by Hambletonian, who turned a 2:48 1/2 mile, then a very fast time for a three-year-old trotter.

Hambletonian’s owner soon capitalized on his horse’s reputation. Rysdyk put his horse to stud for lucrative fees, beginning at $25 a leap (i.e. one mating). In the last years of Hambletonian’s life, Rysdyk got $500 a season due to the prepotency of his horse. Hambletonian earned some $200,000 at stud. In all, he was bred to some 1,900 mares resulting in 1,331 foals. Forty of these foals trotted the mile in less than 2 minutes 30 seconds. Among Hambletonian’s many distinguished heirs were Dexter, Happy Medium, George Wilkes, Dictator, and Electioneer. The blood of Hambletonian is in most of today’s distinguished trotters and pacers.

Lady Suffolk, the “Old Gray Mare” of song and legend, was foaled in Smithtown, Long Island, in 1833. She was a great-granddaughter of Messenger, and was the first trotter to go the mile in less than 2:30. She did it in 2:29.5 at the age of 12. Her reputation lasted well after her death in 1853. 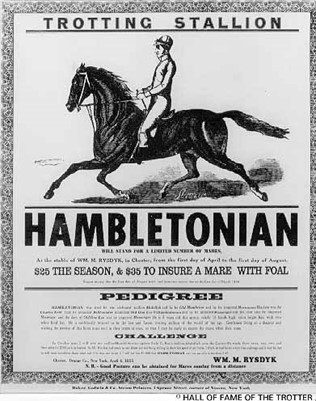 On June 21, 1867, some 15,000 people gathered at the Fashion Course on Long Island to see one of the great races in the country. A match was set between Ethan Allen, the great-grandson of Justin Morgan, and Dexter, the son of Hambletonian. Ethan Allen was then 18 years old and Dexter half the age. Dexter was heavily favored at post time. This was a match between Morgan and Hambletonian blood. Ethan Allen was the victor in three straight heats, but the days of Morgan supremacy on the track were numbered.

The ancestry of the Standardbred reaches back to the Darley Arabian, whose blood was brought to America in 1788 by his noted descendant, Messenger. The influence of Messenger was finally manifested in Hambletonian 10, the dominant sire in the history of the breed. The Hambletonian family quickly surpassed Morgan challengers, as well as the Clay, Mambrino, and Blue Bull families of trotters. Foaled in 1856, Hamiltonian?s first great son, George Wilkes, defeated the celebrated Morgan, Ethan Allen, in three straight heats. Another son, Dexter, was foaled in 1858, and set a record mile as a gelding. Other important sons of Hambletonian, who affected subsequent harness racing, were Dictator, Happy Medium, and Electioneer. The Standardbred gains its name from the fact that registered horses must meet specific standards, first stipulated in 1879 by the National Association of Trotting Horse Breeders. The registry is based on lines of breeding, performance, and age. 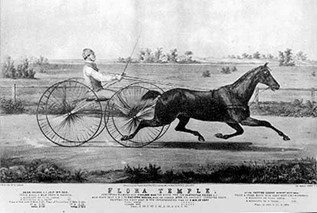 In the 1860s most tracks in America operated independently. There was a need for a coordinate schedule of racing, whereby leading horses would move from one track to another on a regular basis. In 1871, representatives of three tracks met in Cleveland, Ohio, to discuss the possibility of what was ultimately known as the “Grand Circuit.” The first year of “Circuit” racing was 1873, and the total purse was $169,300. In all, some 60 tracks across the country were represented on the Grand Circuit and the schedule lasted most of the year.