The Evolution of the Racing Sulky 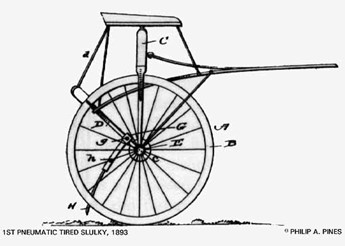 The smooth gait of the trotting horse established its popularity as a road horse during the 19th century. Man’s competitive instinct being what it is, trotters inevitably were raced against one another by their owners. Originally, trotting matches were raced from the saddle. But the greater use of vehicles – due primarily to improved roads – put the racing trotter between the shafts and harness racing was born. The vehicles used in harness racing were, in the early years, of two types: the two-wheeled sulky and the wagon. Both of these vehicles roughly corresponded to types of vehicles in every day use, although they were greatly reduced in weight and simplicity of construction. The greater speed available from the sulky ultimately assured its role as the most favored vehicle in harness racing. The racing sulky in the mid-19th century was what we now call a high-wheeled sulky. It had a straight iron axle and had wheels which were about five feet in diameter, therefore, positioning the driver high above the horse. These early sulkies weighed about 100 pounds. Various innovations throughout the 1800s reduced the weight of the sulky to about half that. In 1878 the bent axle was introduced which allowed the use of shorter shafts, since the horse’s hind legs no longer risked hitting the axle. This made for a more compact and stable vehicle, although the high-wheels still had a notorious tendency to slew in turns. In 1892, a radical innovation was made in sulky design which created the ancestor of today’s sulky by placing pneumatic-tired bicycle wheels on a high-wheeled sulky frame. This ingenious move greatly increased the potential speed of the trotter by lowering wind resistance and by increasing stability: therefore the “bike-sulky,” as it was named, quickly replaced the high-wheeler in harness racing. Subsequent innovations in materials and design have brought the sulky to its current weight of about 40 pounds.

Dan Patch was bred in Indiana by a country storekeeper named Dan Messner, Jr. The big, light bay colt was foaled in 1897. His sire was the noted Joe Patchen and his dam was a $225 mare. Dan Patch first raced on August 30, 1900, when he lost only one heat. In 1901, he was on the Grand Circuit and caught the eye of a sportsman from Buffalo, New York, named M. E. Sturgis, who bought him for $20,000. Driven by Myron McHenry, a famous driver of the day, Dan Patch created a brilliant record losing only two heats in 56 starts by July 1902. Again Dan Patch was sold, this time to M.W. Savage of Minneapolis for $60,000. Savage owned a large stock food company, and he restricted Dan Patch’s schedule to public exhibitions in which the big pacer would pit his speed against the clock. In 1903 at Memphis, he paced a 1:56 1/4 mile to sulky and on the same day did 1:57 1/4 to wagon. In 1904, Dan Patch did a 1:56 mile, again at Memphis. At the Red Mile in Lexington, he went an incredible 1:55 1/4 mile. 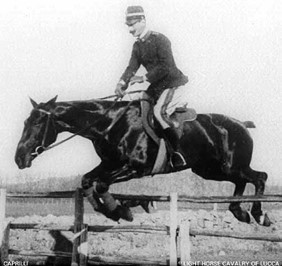 Dan Patch became a national celebrity. There was Dan Patch smoking and chewing tobacco, a Dan Patch washing machine, even a dance named the Dan Patch Two Step. He earned his owner $17,000 a year in stud fees, and as much as $21,500 for a single exhibition. In all, it is thought that Savage’s horse made him $3,000,000 richer. Dan Patch had his own private railway car to travel in, and at home he lived in a huge barn that was so grand it was called the “Taj Mahal.” Dan Patch died on July 11, 1916, and the next day he was followed by his owner.