In the early 1700s the agricultural region near the Conestoga River in Pennsylvania was growing prosperous. This area was located nearly 70 miles from Philadelphia, and it was difficult and expensive to carry produce to market by pack horse. Bringing back necessary supplies to the valley was also a problem. Necessity being the mother of invention, the Germans of the Conestoga Valley developed a wagon which could safely and economically carry produce and supplies for the area’s farmers. No traditionally constructed wagon would do. The roads in that area were sometimes barely passable.

The Conestoga was a Masterpiece of Design

The wagon was made with the finest materials by the careful craftsmanship of the German Mennonites. The various elements were made of different woods, each with special properties. The wheels had hard hickory spokes and hubs were made of gumwood. The frame was constructed using oak beams, and the sideboards of the bed were made of poplar. Each piece of wood was carefully chosen and joined. The wagon’s wheels were painted bright red and the body deep blue. The bed, covered with a cloth roof of linsey-woolsey, was higher at the ends than in the middle. If goods shifted during transport, they would fall to the center and not seriously affect the wagon’s balance. Conestoga wheels were larger than ordinary, so the wagon could travel through bogs and over humps as smoothly as possible.

The Great Red, White, and Blue Wagons Came to Symbolize America’s Pioneer Spirit
The Conestogas fulfilled their initial function as freight wagons, but later were adopted by pioneers moving west to settle the vast reaches of the American interior. These “prairie schooners”, smaller versions of the Conestoga, carried Americans across the Santa Fe and Oregon Trails to the Pacific coast and in doing so contributed far more to the nation’s growth than their original builders could have ever anticipated.

Conestoga Drivers Began American Custom of Driving on the Right 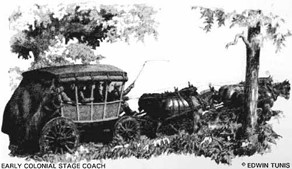 The Conestoga was driven by a “waggoner” who rode the near (left) wheel horse. He managed his team of six horses with verbal commands, a single jerk line, and a long blacksnake whip which cracked the air yet hardly ever touched a horse. Because of his position on the left of his team, the driver held to the right side of the road. Smaller on-coming vehicles were forced to their right to pass. Soon it was custom for all drivers to keep to the right of the road. However, other vehicles placed the driver on the right until Henry Ford established the driver on the left side in 1909.

Ferrying a Horse
In the days before bridges, it was not easy to cross a river or a swollen creek with a horse. Many horses would refuse to ford or swim the stream; regardless, the rider was sure to get wet. The alternative was to search out a farmer with a ferry. Ferries were often no more than a deck and rails attached to two dugout canoes. Two parallel boards with cleats across them served as a gangplank for bringing the horse aboard. A gangplank was kept on each shore. Most horses would board easily, but now and then a nervous horse would have to be blindfolded. The horse was kept in the middle of the board by cross-tying him to the boat’s side rails. The average fee for ferrying a horse and rider was about 12 cents.

Assembling a Packhorse Train
Groups of farmers joined forces to pack their wheat to market. Each horse carried over 160 pounds of grain in two coarse linen sacks, lashed to the pack saddle and covered with a square tarpaulin as a guard against the elements. The pack horses were grouped into strings of 14 or 15 animals. Each string was led by a man on horseback who fastened the halter rope of the first pack horse onto his saddle. Each lead horse wore a bell on a strap around his neck as they made their way through the woods to market.

“Horse,” the Post Rider
On the route between Philadelphia and New Brunswick, New Jersey, the post rider was a wizened elderly man known as “Horse,” though his name was actually Horace. Nobody knew his last name which was Smith. His mail traveled in two leather pouches slung behind the saddle across the back of his languorous nag. One pouch held letters for people along his route; the other was for through mail…Even in summer when the roads were dry, a letter took three weeks to get from Philadelphia to Boston. Postage for letters delivered between two points on his route went into “Horse’s” purse. “Horse” also picked up some profit by carrying small packages or doing errands along the way. He was very lonely on most trips, but when “Horse” announced his arrival at a stop with a blast of his horn, the people hurried to gladly greet him. His steed knew the road and ambled along it half asleep; “Horse” passed the time knitting stockings and mittens, which he sold by the wayside to whoever would buy”;(Edward Tunis, The Tavern at the Ferry)

Wagons West
The Prairie Schooner was roughly a half-sized version of the Conestoga that typically measured 4′ wide and 10′ to 12′ in length. With the bonnet, a Prairie Schooner stood about 10′ tall, and its wheelbase was over 5′ wide. It weighed around 1300 pounds empty and could be easily dismantled for repairs en route. The immense distances and scarcity of good water encountered on the long western journey resulted in mules and oxen being the favored draft animals. Teams of 4 to 6 oxen or 6 to 10 mules were sufficient to pull the wagons to across the country. The wagons were manufactured by the Studebaker brothers or any of a dozen other wagon makers specializing in building wagons for the overland emigrants. A Prairie Schooner in good repair offered shelter almost as good as a house.