THE HORSE IN EARLY CHINA 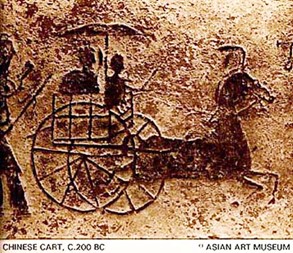 According to Chinese scholars, the first domestication of the horse in China is thought to have occurred during the Lungshan period, between 3,000 and 2,300 BCE. While these dates are questioned, horse drawn war chariots were in use in China during the Shang Dynasty (circa 1,450 – 1,050 BCE). Repeated invasion and devastating plunder by the Hiung-nu (Huns), led to the development of a Chinese light cavalry, which provided a more effective defense against the northern invaders. Continued clashes with the Huns prompted China to adopt and refine their enemy’s cavalry techniques based on the use of a saddle and the bow and arrow. During the Han Dynasty a more unified and coordinated war effort proved successful in stopping the destruction and pillage. In addition to superior tactics, improvements were made in selective breeding. Expeditions were sent to Southeast Asia to trade for stallions of the Persian type, in an attempt to upgrade the Mongolian pony in use since 300 BCE.

One of the more significant inventions in equestrian history was the breast-strap harnessing system for horses. This probably occurred in China during the late Warring States Period around 300 BCE.

Throughout the world, oxen were harnessed prior to horses. Horses, however, have greater endurance and can generate 50% more foot-pounds per second than oxen because of their greater speed. When humans first attempted to harness the power of the horse, they looked for a model to the highly successful yoke-based system used with oxen. The physiology of the two animals, however, is quite different in that the ox’s spinal column forms a bony hump in front of which a yoke can effectively be placed.

The traditional ox harnessing system was quite inappropriate for “humpless” horses. As humans attempted to modify and adapt the existing ox system, the throat-and-girth system emerged as the first harnessing system specifically for equines.

Throat-and-girth harness is made up of a girth circling the belly and the rear part of the ribs with the point of traction being located at the top. To prevent the girth slipping backwards, a throat strap was added. This crossed the withers diagonally and surrounded the throat of the animal, compressing the horse’s trachea. The inevitable result was to restrict the horse?s breathing as soon as it attempted to pull against the harness. Despite the inefficiency of the throat and girth system, it soon spread throughout the world and would not be completely replaced in Europe until 600 AD.

Transition to the Breast-strap Harnessing System

A study of Han Dynasty (206 BCE – 220 AD) representations of horse drawn vehicles, compared with those from other ancient civilizations, shows that the heavier Chinese vehicles, carrying up to six people, could be pulled by a single horse. Much lighter vehicles from other parts of the world could carry a maximum of two people but often required four horses. This could only be possible with a more efficient harnessing system which did not restrict the horse’s ability to breath, and seems to indicate that the breast-strap harness had already been invented by the late Warring States period (480-221 BCE).

How the Chinese were led to make one of the greatest breakthroughs in equestrian history is still a mystery. One theory holds that the invention of the breast-strap harnessing system for horses was derived from the human harness system used for boat haulage on China’s canals and rivers.