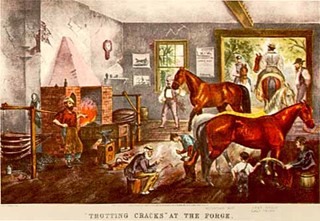 The 1800s was marked by unprecedented economic growth. As new markets for manufactured goods were opened, the need for horse transportation increased dramatically. As a result, many horse drawn vehicles were built by local carriage makers or by large wagon factories. The need for new harness and constant repairs on the old created a demand for skilled harness makers. Wheelwrights, farriers, and blacksmiths were essential to the livelihood of every city and town. Other horse-related crafts and occupations included saddlers, grain farmers, feed merchants, veterinarians, grooms, coachmen, horse breeders. In all, the Industrial Revolution and the growth of both the economy and population created a zenith of inter-dependence between man and horse.

The Farrier
The blacksmith was a prominent member of nearly every community. He supplied the local population with articles ranging from simple nails and chain to skillfully created axes, carriage hardware, and door latches. In fact, he created nearly every metal object in the community. The blacksmith who specialized in shoeing the town’s horses and oxen was called a farrier. In the days before the veterinarian, he cared for sick and injured animals as well. The farrier made a horse shoe from a straight bar of iron, which he heated white hot and then cut and shaped on the anvil. The nails were cut from rods of soft iron. The farrier kept a stock of variously shaped and sized shoes on hand to suit the needs of specific horses. Occasionally, horses’ hooves were either malformed or had painful cracks which required the skilled application of corrective shoes. 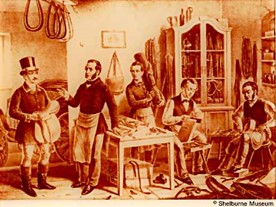 The harness maker was a valued member of the community in the 1800s. He was kept busy providing new harness to his many customers, as well as repairing and reconditioning used harness. The harness maker started with tanned hides and transformed these into harness of exacting specifications. The United State census for 1870 reported 7,607 harness businesses operating throughout the country, employing 23,557 harness makers. Of the 258 industries listed, harness making and saddlery ranked 34th in the number of people employed. This fact points to the vital role harness makers played in the ‘Golden Age of the Horse.’

Carriage Makers
Most sizable towns had a carriage and wagon company. Carriage and wagon making was usually conducted by companies rather than individuals. A team of men was necessary to build vehicles profitably. A carriage or wagon required the skills of a blacksmith, carpenter, joiner, upholsterer, and painter, as well as a managerial and sales staff. A carriage required an average of 1,171 fittings, 84 carriage bolts, 50 to 60 screws and 8 to 12 feet of chain. A wheel called for some 145 hand forged iron parts, in addition to the painstaking labor of assembling its wooden elements in a perfect fit. The firms of James Brewster and G.D. Cook in New Haven, Connecticut, and the Abbot Downing Company of Concord, New Hampshire, were very large and well-known firms.