HORSES IN TOWN AND COUNTRY

In the Late 1800s, the Horse was a Central Feature of Urban Life 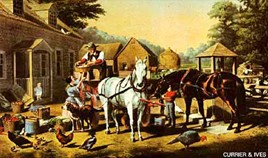 In older sections of towns and cities, we sometimes encounter isolated hitching posts, mounting blocks, or water troughs – symbols of the bygone era of the city horse. The splendid carriage houses now serve as fashionable apartment houses or homes; the less splendid are garages or have been demolished. In the late 1800s the horse was a central element in urban life. It hauled goods, pulled omnibuses and cabs, and spirited people about in elegant carriages. The increasing prosperity of the urban population created a huge new market for horses. In return, carriage makers, wheelwrights, harness makers, and feed merchants prospered because of the horse’s increased prominence in everyday life.

The Horse in the Country
The Versatile Horse was the Farmer’s Most Important Asset
The exploration and the subsequent settlement of the America West created the enormous demand for the horse. Man saw the horse as power for taming the wilderness and cultivating the virgin soil. The sluggish but easily maintained ox had previously fulfilled the needs of the farmer. But the versatility and speed of the horse made it a valuable asset to the farmer of the 1800s. The horse plowed his fields, pulled his wagons and carriages, and became an essential part of the rural economy. The loss of a small farmer’s horse frequently meant his ruin. The horse population grew immensely during the 1800s. In 1867, the rural horse population in America was estimated at nearly 8,000,000, while the number of farm workers was well under 7,000,000. By the early 1900’s, there were nearly 20,000,000 on America?s farms. 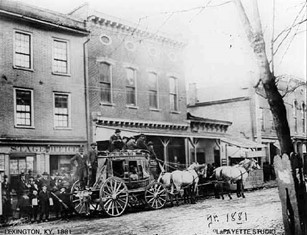 The new and improved farm equipment, developed between 1820 and 1870, resulted in larger and more productive farms and created a demand for larger and stronger horses. With the McCormick reaper, one man could do the work of 30. Also, new steel plows, double-width harrows, seed drills, mowers, etc., decreased the need for manpower, but increased the demand for larger horses to power the new equipment. Where the average American farm in 1790 was 100 acres, the agricultural revolution allowed the average acreage to more than double over the next 60 years. Improved rail and steamship transportation opened new markets in the fast-growing cities of both America and Europe. The result was the first importation of European draft stock to America in 1839, followed by massive importation and domestic breeding after the Civil War. By 1900 there were over 27,000 pure bred draft horses in the U.S., and the average horse’s size had increased to between 1,200 and 1,500 pounds.