HORSES WERE SPECIFICALLY BRED FOR WARFARE AND CHIVALRY

The Destrier: The Horse of War 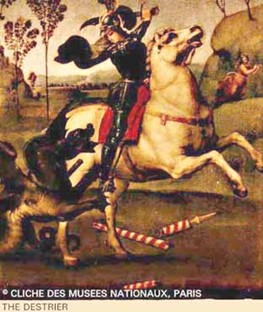 Destriers were always stallions. It is commonly believed that these great warhorses were developed during the middle ages to support the weight of the armored knight. In actuality, a good suit of armor seldom weighed over 70 pounds. When the weight of the rider was added, the horse would still only be expected to carry 250 to 300 pounds. The reason large horses were so effective in warfare and in tournaments was because their weight gave greater force to the impact of the knight’s lance. By the 14th century, an average warhorse would weigh between 1,200 and 1,400 pounds and stand approximately 14 to 15 hands. When the knight struck a conventionally mounted opponent, the impact could be devastating. Outfitting a knight could be tremendously expensive. Armor and weapons were costly, but the knight?s most valuable asset was invariably his destrier.

The destrier was the horse of battle, but would not have proved a comfortable mount for the “off duty” knight. Instead, the knight rode the palfrey, a short-legged, long-bodied horse which had a gentle amble or pace for a gait. The smooth ride afforded by the palfrey also made it a suitable mount for the wounded or aged who might have difficulty mounting and riding a taller horse.

While the destrier and palfrey excelled in power and comfort, respectively, they were not fast horses. The need for a fast carrier of messages between armies or kingdoms, gave rise to the courser, the ancestor of the race horse. Coursers were strong, lean horses which probably had “hot” (ie. Turkish, Arabian, or Barb) blood in their veins. A principal source of coursers was the kingdom of Naples. The Neapolitans acquired horses from Africa and bred them to European stock. The result was an extremely fast horse sought by kings from as far away as England who wanted to add speed to their stables.