FROM PREHISTORIC TIMES MAN HAS HUNTED DEER. WHEN HE LEARNED TO RIDE THE HORSE, HE GAINED AN ADVANTAGE OVER HIS FLEET PREY 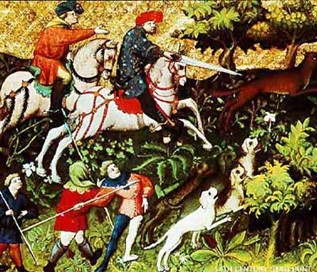 In the Middle Ages, hunting the stag from a horse became a very popular sport, especially in France. By the time of the Norman Conquest, the stag hunt was enjoyed by most noble Norman gentlemen. When William conquered Britain in 1066, he brought the sport, with all its rules and traditions, with him. “Ty a Hillaut” was the old Norman phrase used to alarm the huntsmen that a deer had been roused. This cry was Anglicized to become “Tally-ho,” familiar to the fox hunter of today. Hunting was the exclusive domain of the gentry, and commoners often faced death for poaching.

Stag hunting continued to be a favorite pastime of the Plantagenet and Tudor dynasties. In his painting “Night Hunt,” Uccello portrayed a stag hunt in darkness. The beaters on foot would flush the deer, the hounds followed chase, pursued by the mounted huntsmen who would finally take their fleet-footed prey.