THE HUNTED HORSE: THE EARLY HUNTERS 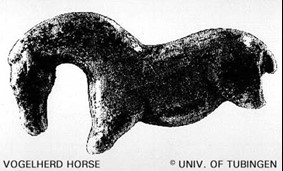 Neanderthal Man
Horses were widely distributed across Europe and Asia and also present in North America during the late Pleistocene or Ice Age (123,000 - 8,000 BCE). This was also the period when Neanderthals (Homo sapiens neandertalensis) reined supreme. Despite having the same brain size as modern humans and adept at fashioning stone tools, they did not have the technology necessary to attach their stone tools to wooden shafts or handles. As such, their weapons used for hunting consisted of little more than rudimentary sharpened wooden spears and clubs. While these were effective enough in killing small game, they would not have been sufficient for hunting larger game like a horse. It is therefore thought that early Neanderthals acquired horse meat though scavenging carcasses killer by other predators.

Around 55,000 years ago, the variety of horse bones found associated with human sites increased, along with the age of the horses from which they came. This appears to indicate that Neanderthals had developed more sophisticated hunting methods and/or weapons which allowed them to hunt horses and other large game.

Cro-Magnon Man
Cro-Magnon man (Homo sapiens sapiens) are thought to have been the earliest form of modern humans. They were living in what is now Europe by at least 33,000 BCE. They, like Neanderthals, considered the horse primarily as a food source. Lacking the means of effectively pursuing their fleet prey or killing it from a distance, Cro-Magnon hunters sought inventive ways to kill their prey. Evidence of this is found at Salutre in France, where the bones of some 10,000 horses driven over a cliff by Cro-Magnon hunters testify to their ingenuity. Cro-Magnon hunters wrought extremely fine spearheads, shaped like a laurel leaf, and wild horses were their chief quarry. 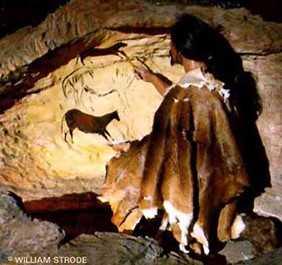 Cro-Magnon Equine Art
One of our first insights into man's appreciation of the horse comes from Cro-Magnon cave paintings. The French caves at Lascaux and Pech-Merle are thought to have been painted some 17,000 years ago, with the Chauvet-Pont-d'Arc cave paintings dating to 31,000 BP (before present).

All of these paintings frequently show the horse as an object of prey. Yet these prehistoric cave paintings also reveal the great majesty man saw in the horse, and show the great effort he made to recreate this beauty on the lasting canvas of the cave's rock walls.

Considering the limited materials available to the Cro-Magnon artist, their skill was amazing. It is thought that they applied the pigment by blowing it through a hollow, bone pipe. Their paints were natural materials; clay, charcoal and minerals that were mixed with animal fat.

The Vogelherd Horse
A Magic Image for Luck in the Horse Hunt
The ivory of a mammoth's tusk provided the material for the Cro-Magnon artist who carved this horse some 34,000 years ago. The tiny carving, thought by some to be the earliest known art object, is two and one half inches long and is called the Vogelherd Horse after the cave in Germany in which it was discovered. Archaeologists believe the carved animal images were carried by hunters for good luck.