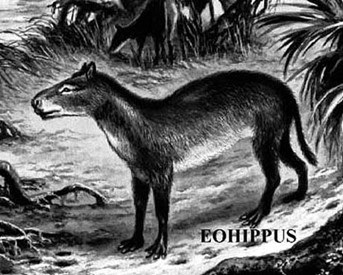 55 - 45 Million Years Ago
Hyracotherium, or eohippus (dawn horse) as the scientists named it, first appeared on earth as a small, timid creature no bigger than a dog. It existed from 55 to 45 million years ago. It was 10 to 17 3/4 inches tall at the shoulder and had four toes on its front legs and three toes on its hind legs. Hyracotherium lived in a damp, hot jungle of huge cypress and mammoth trees. Here it fed on leaves as it roamed over the boggy ground. Small size and multi-toed feet kept Hyracotherium from sinking into the swamp. The remains of this original little horse have been found in such places as the Wasatch Range in Utah, the Wind River Basin in Wyoming, and in Europe.