The creation of the “Intersectional Match” in the 1820s pitted the North against the South horses to settle the question of which section of the U.S. owned the best horses. 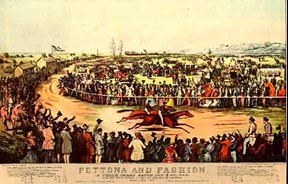 William Ransom Johnson of North Carolina, the “Napoleon of the Turf,” was the first individual to suggest an intersectional race. His challenge was aimed at Cornelias Van Ranst of New York who owned American Eclipse, considered by Northerners to be the fastest horse in America. With the financial backing of his friends – most notably steamboat and railroad pioneer, John C. Stevens – Van Ranst accepted Johnson’s challenge. They agreed to a wager of $20,000 a side, and a $3,000 forfeit penalty. The match was scheduled for the last Tuesday in May, 1825, at the Union Course, in New York.
American Eclipse, then nine years old, was the object of Southern resentment since he had beaten Sir Charles, “the lion of the Virginia turf,” in 1822. Johnson surveyed the South for the best horse it could offer, and at last he chose a five-year-old named Sir Henry. Race day saw a crowd of some 60,000 assembled at the Union Course. Twenty thousand of the fans traveled the long journey from the South to back their horse. Spectators included Vice President Daniel Tompkins, Andrew Jackson, and Aaron Burr. Sir Henry carried 108 pounds compared to American Eclipse’s 126. In the first four-mile heat, Sir Henry broke from the pole and set “a killing pace.” He ran away from Eclipse and won the heat. During the heat, Eclipse?s jockey beat him so badly that “blood flowed profusely from…foulcurs and gave a more doleful appearance to the discouraging scene of a lost heat.” For the second and third heats, Eclipse?s jockey was replaced, and he outran Henry in both to win the match.

Boston Verses Fashion
Intersectional matches continued to serve as battles of North and South until the Civil War provided a bloodier alternative. One of the greatest of the intersectional matches was between the South’s celebrated horse Boston and the mare Fashion. Their match took place at the Union Course on May 10, 1842. Some 70,000 spectators were in attendance, including 40 senators and congressmen. In the first heat, Boston struck his hip on the rail and was severely cut. Fashion charged on to win the heat in the record time of 7:32.5. The second heat settled the match when Fashion beat Boston by 60 yards.

Boston’s defeat by Fashion does not detract from his fame as a racehorse. He was the son of Timoleon and a grandson of the great Sir Archie. Foaled in 1833, he received his name after having been won in a card game called “Boston.” He was a mean colt, and hard to train. Boston’s new owner was given the advice that the horse be “either castrated or shot – preferably the later.” Boston did become a racehorse, although he remained hard to handle. Some say he won 40 out of his 45 career races because he bit the other horses as they tried to pass. Boston’s reputation was so great that his owner was actually paid to keep him out of races. In old age, Boston became blind and emaciated, but he did not lose his dynamic spirit. One account of Boston’s death says: “On the morning of January 31, 1850, he was found dead in his stall, the sides of which were covered in blood where Boston had repeatedly struck his head and legs in his final furious struggle.” Among the unborn foals Boston had sired before his death was Lexington, one or the most successful stallions in Thoroughbred history