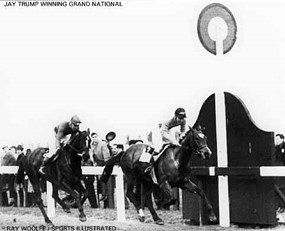 Horse racing has known many “rags-to-riches” stories, but one of the most poignant is that of Jay Trump. Jay Trump’s dam, Be Trump, by Bernborough, was thought to be sterile and was turned out to pasture by her owner, Jay Sensenich. In the same pasture was a stallion named Tonga Prince, by Polynesian, who also sired Native Dancer. The unplanned breeding of these two produced Jay Trump, foaled on April 1, 1957.

Jay Trump was a dark bay colt with a white diamond between wide-set eyes. In early training, a jockey struck the colt in the eye with a whip. In terror, he crashed through the track fence. The jockey went to the hospital, and Jay Trump suffered a nasty gash on his right foreleg and gained a reputation as fractious horse. His subsequent racing career did little to enhance his reputation as a flat-track runner, and he was relegated to $1,500 claiming races.

The Misfit Worked Hard to Become a Winner
Chapter two in Jay Trump’s career began when a perceptive young steeplechase jockey named Tommy Smith from Virginia purchased the young colt for $2,000 for Mrs. Mary Cunningham Stephenson. Under Smith’s training, Jay Trump developed quickly into a fine steeplechase horse.
Smith first raced him over fences on March 17, 1962. Over the next four years Jay Trump established himself as America?s best steeplechaser. In 1964 he won the American Eastern Hunt Triple Crown by taking the Maryland Hunt Cup, Grand National Point-to-Point and My Lady’s Manor race, all timber races. He also became one of the few horses to win the America?s premier steeplechase, the Maryland Hunt Cup, three times. 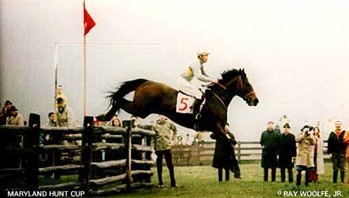 Despite his success in the U.S., Tommy Smith’s ultimate ambition was the Grand National in Aintree, England – the most important steeplechase event in the world. Arriving in England in July of 1964, horse and jockey began training under the supervision of Fred Winter, a former winning Grand National jockey. Under Winter’s tutelage, Smith and Jay Trump picked up the two steeplechases victories necessary to qualify for the 1965 Grand National.

Jay Trump went off at odds of 100 to 6. Ahead lay 30 timber jumps, over roughly 4.5 miles. Jay Trump and the favorite, Freddy, had drawn away from the field by the final two fences. They remained in a duel to the finish with Jay Trump finally pulling away to win by 3/4 of a length. American horses had won the Grand National before; but only Jay Trump was American bred, American owned, and American ridden.

In Retirement
Jay Trump retired in 1966, after winning his third Maryland Hunt Cup, to Meshewa Farm, near Cincinnati. In 1971, he was elected into the Racing Hall of Fame. Throughout his retirement he was cared for by Serena Stephenson Molloy who described him as “…a very loving horse, I used to whistle the call to the post and he?d come running. He knew.”

August 24, 1988 at the age of 31, Jay Trump was humanely destroyed after found to be suffering from a twisted intestine. At his owner’s request, he was buried at the finish line of the steeplechase course at the Kentucky Horse Park – his grave marked with yellow and white garden mums.