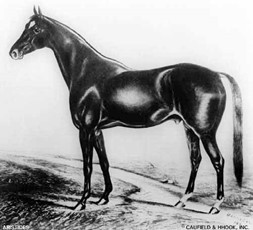 The Kentucky Derby was sponsored by the Louisville Jockey Club and Driving Association which owned the track now known as Churchill Downs. Colonel M. Lewis Clark founded the Association after he had visited Europe to study their farms and racing regulations. Clark was particularly impressed by the English system. He called the Kentucky race “Derby,” after the Epsom Darby in England. It was first run in 1875, and has run continuously ever since. In this first Kentucky Derby, Aristides crossed the finish line ahead of 14 challengers to win $2,850. In 2003, Funny Side captured the 129th Derby and a purse of $1,100,200.

As the new century dawned, the Kentucky Derby was yet to reach the status envisioned by Clark. In 1903, however, Louisville businessman, racing enthusiast and master promoter, Matt Winn was persuaded to purchase the financially strapped Churchill Downs along with several other prominent citizens. Winn reluctantly agreed to manage the track and over the next 46 years built the Derby into the most prestigious race in America.

The Run For The Roses Today 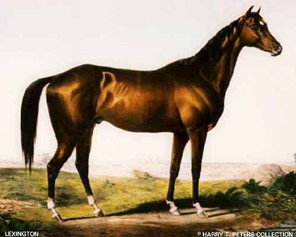 Dr. Warfield Breeds a Bay Colt Destined for Fame
Of the many individuals who helped develop Lexington, Kentucky, as the Thoroughbred breeding capital of America, Dr. Elisha Warfield is among the most important. Warfield’s father came to Lexington in 1790 and opened a general store. Elisha Warfield graduated from Transylvania University with a degree in medicine. He enjoyed a successful medical career, but in 1821, gave it up in favor of breeding horses. Dr. Warfield raced horses as early as 1805 and was breeding Thoroughbreds by 1806. At the age of 28, he was one of the founding members of the Lexington Jockey Club in 1809. The most important date in Dr. Warfield’s life was March 29, 1850. That day his mare, Alice Corneal, foaled a bay colt by Boston which was named Darley, after the Darley Arabian.

The Greatest Stallion in America 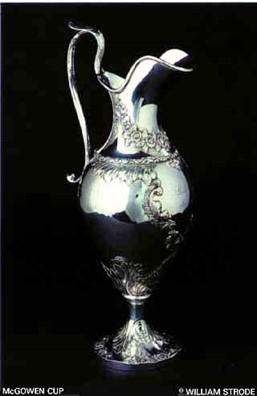 After winning his first two races at the age of three, Darley was bought by a syndicate headed by Richard Ten Broeck, who renamed him Lexington. Lexington won six of seven races before he went partially blind. He was then purchased for $15,000 by R.A. Alexander and retired to stud. Lexington’s success as sire raised his stud fee to $500 by 1865, the highest in the country. He was the leading sire in America from 1861 to 1877, the last two years posthumously. Lexington sired such important horses as Kentucky, Asteroid, Norfolk, General Duke, Harry Bassett, Tom Bowling, Acrobat, Sultana, and Duke of Magenta. The list might have been even greater, but most of Lexington’s early foals were killed in service in the Civil War. Regardless, Lexington was the greatest Thoroughbred stallion of the 1800s. 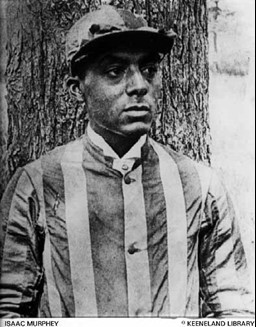 When dash races replaced the custom of four-mile heat races, the jockey’s ability to take immediate and complete command of his mount was essential. One of the first individuals to gain a reputation as a brilliant jockey was Isaac Murphy. Murphy, an African American, was born in Fayette County, Kentucky, on January 1, 1859. He rode in his first race at the age of 16 – some say he was actually 14 at the time. Murphy’s style was distinguished by the fact that he rarely used a whip or spur on his horse. Instead, he talked to his horse and was seemingly able to persuade the horse to win for him. Incomplete records of the era indicate Murphy won 628 of 1,412 races he entered, for a record lifetime winning average of an amazing 44%. He won the Latonia Derby five times, the American Derby four times and the Kentucky Derby three times. Lucky Baldwin, the famous California horseman, at one time paid him $10,000 a year on retainer. Murphy made enough money to retire by the age of 36, but died of pneumonia at the young age of 37 – probably due to the rigid dieting required during his racing career.

1885 – Tod Sloan
Tod Sloan (1874-1933) was a memorable jockey both for his contributions to the sport and his flamboyant manner. Sloan gained his name from the nickname “Toad” which fellow jockeys gave him due to his short legs. Soon Toad gave way to “Tod.” Later notoriety turned Tod to Todhunter, a name fitting the dandy he became. Sloan popularized the “monkey-on-a-stick” style of riding, the universal style today. Sloan’s abnormally short legs led to shortening the stirrup leathers so that his knees nearly touched his chin. He rode above the horse’s withers, giving him the advantages of a better balanced horse, less wind-resistance, and the use of the whip instead of the spurs. Soon all jockeys adopted Sloan’s winning style. Sloan is also remembered as the first jockey to demand a percentage of the winnings rather than a fee per ride. At the height of his career, Sloan cavorted with the likes of Diamond Jim Brady and Lillian Russell. He traveled with a valet and trunks of clothes. Tod Sloan squandered his money and died in obscurity; but racing cannot forget his legacy.