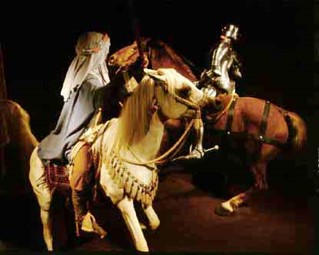 In 1492, knights and soldiers from all over Europe joined in the fight to drive Moors out of Spain. The Spanish monarchy insisted that, before Columbus could begin his voyage, the Moors must be removed. The Moors had dominated Spain for centuries, but their Islamic customs and religion were never totally accepted.

This tableau represents the encounter of a knight and a Moor, perhaps during the Battle of Grenada, the decisive battle in the expulsion of the Moors from the Iberian Peninsula. The two used distinctly different fighting styles as well as types of horses. The knight is mounted on a cold blooded European horse, while the Moor rides a warm blooded horse typical of the Arab and Barb horses used by the Moors. There is no temperature difference in the blood of warm or cold blooded horses. Other terms used to describe them are light and heavy horses. Horses descended from the smaller Arabian or Barb, horses of the desert, are referred to as “warm blooded,” while heavier, draft-type, horses associated with colder climes of Northern Europe as “cold blooded.” While the added weight of the knight’s mount provided extra leverage for his lance, the Arabian-type horse was good for quick turns and endurance, and often allowed the Moor to out maneuver the knight’s slower horse.

For many years it was thought that the Moors had brought horses with them when they came to Spain. Now it appears that while some Barb-type horse must surely have been introduced by the Moors, the majority of their horse came from indigenous stock already on the Iberian Peninsula