Of the Many Horses Which Live On in the Hearts of Americans, One Horse is Most Remembered 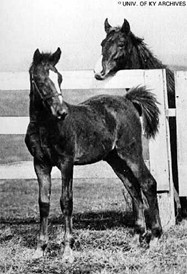 Those who knew Man o’ War were enriched by the experience. This was not just another racehorse. Man o’ War was one of 1,680 Thoroughbreds foaled in 1917. He was born on March 29 at the Kentucky nursery owned by August Belmont II. Man o’ War’s sire was Fair Play, by Hastings, both of whom were mean and temperamental, but excellent weight carriers. To provide balance to Fair Play’s temper, Belmont bred him to Mahubah, by Rock Sand who had won the British Triple Crown. Her ancestors were even tempered and intelligent. The colt was named “My Man o’ War” by Mrs. Belmont, – since he was a war baby. When Belmont entered the Army in 1918, he ordered his entire yearling crop of sold at Saratoga. 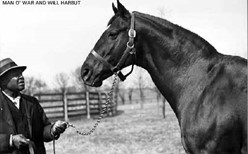 At Saratoga, Man o’ War was bought by Pennsylvania horseman Samuel Riddle for $5,000. Riddle reasoned that if the big, chestnut yearling didn’t succeed as a race horse, he could perhaps be trained a show jumper. The horse was shipped to Riddle’s training farm, “Glen Riddle,” in Maryland. Man o’ War was trained by Louis Feustel who had trained Mahubah, Fair Play, and Hastings. Here Man o’ War grew to a size worthy of his nickname, “Big Red.”

When he was sent off to his first race at Belmont Park, a retired bay hunter named Major Treat accompanied him and would continue to travel with Man o’ War throughout his racing career. 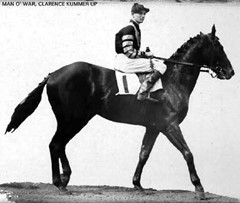 On June 6, 1919, ridden by Johnny Loftus, Man o’ War won his first race by six lengths, crossing the finish line at a canter. He showed his desire to be a front runner and never liked to have any other horse in front of him. Legend has it that upon seeing him in action, a spectator asked a groom, “Who’s he by?” The reply was “He’s by hisself, and there ain’t nobody gonna get near him.” He ran only in expensive stake races for the remainder of his career. As his wins built up, so did the weight he was required to carry. By his fourth race, Man o’ War was carrying 130 pounds, a very great weight for a two-year-old.
His sixth race was the Sanford Memorial and the only defeat of his career. A bad start left him with a ten length deficit, and once he caught the pack he was boxed in. He was beaten by a horse ironically named Upset, whom Man o’ War beat on six other occasions. In spite of this lone defeat, at the end of his two-year-old season he was selected Horse of the Year.

Record Setting Three-Year-Old
In 1920, Man o’ War went undefeated as a three-year-old. He also reduced the American record for the mile by two-fifths of a second, to 1:35 4/5, despite being held back by his jockey, Clarence Kummer. Later, in the Belmont Stakes, he went the mile and 3/8 in 2:14 1/4 – a record which stood for 50 years. By the time of the Dwyer Stakes at Aqueduct, Man o’ War could find only one opponent, John P. Grier, a horse from the Whitney Stables. In this race, Grier challenged Man o’ War, and Kummer used his whip for the first time. Man o’ War dashed to victory, and set a new American record for the one mile and 3/16 distance at 1:45 1/5.

The crowning event of Man o’ War’s career came in a match race against the celebrated Canadian horse Sir Barton, the first winner of the Triple Crown. On October 12, 1920, he and Man o’ War met in Windsor, Ontario. Man o’ War won by seven lengths! In his career “Big Red” won 20 of 21 races.

As A Sire of Many Winners, Big Red Stood at Stud in Kentucky, an American Hero
Man o’ War’s stud career was just as distinguished as his career on the track. At stud on Hinata Stock Farm in Lexington, Kentucky, he sired 13 foals his first season, the most notable of which was American Flag. Riddle did not allow Man o’ War to breed to many mares besides his own. Although he became history’s leading sire in terms of his off-spring’s winnings, his stud career might have been even greater had he been bred to better mares. Among Man o’ War’s most important get were Triple Crown winner War Admiral, Crusader, Blockade, War Hero, War Relic, Clyde Van Deusen, and Battleship. In all, he sired 379 foals who won 1,286 races.

The Death of a National Landmark 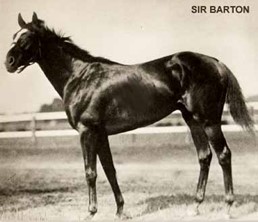 Under the close care of his eloquent groom, Will Harbut, “Big Red” was a national landmark, and thousands visited him each year at Riddle’s Faraway Farm. In 1947, Will Harbut died of a heart attack, and barely a month after he was followed by “the mostest horse,” also victim of a heart attack at the age of 30. Man o War’s burial was a moment of national mourning. His funeral was broadcast over radio and covered by the press all over the world. Samuel Riddle had commissioned Herbert Hazeltine to sculpt a memorial statue of Big Red while he lived, to be placed on his grave. In 1977 Man o’ War and his famous statue were brought to the Kentucky Horse Park. Here at the end of the entrance drive, he continues to greet horse fans from all over the world.