THE OFFSPRING OF THE FOUNDATION STALLION 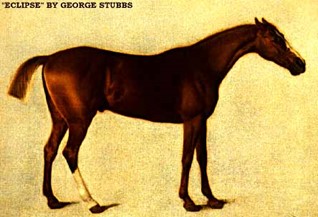 Keeping in mind the fact that the foundation stallions were Oriental horses, it should be noted that the descendants of these sires were the first actual Thoroughbreds. They were the progenitors of the breed as we know it today. The foundation sires stand at the beginning of the Thoroughbred bloodline, but a number of generations were required to create horses which could consistently pass on the distinguishing characteristics of the Thoroughbred horse. Out of some 200 Oriental horses imported to England between 1660 and 1750, only the direct descendants of these three foundation stallions contributed to the breed’s greatness.

Herod
The offspring which fixed the influence of the Byerley Turk as a foundation sire was named Herod (originally King Herod) who was foaled in 1758. He was owned by the Duke of Cumberland, the third son of King George II, who was an important breeder of horses at Newmarket and in Hanover. Herod was both an fine racehorse and a superlative sire. His descendants were extremely important in the development of the Thoroughbred throughout Europe and America. Among the most notable descendants of Herod were Diomed (winner of the first Epsom Derby in 1780), Sir Archie, the Flying Dutchman, and Epinard.

Eclipse
1764 was the year of a great eclipse and this astronomical event became the name of the horse who was a star in the history of the Thoroughbred. Eclipse, was by Marske out of Spiletta and was bred for the Duke of Cumberland. He began racing in 1769 at age five, when he ran away from his competition in his first race at Epsom. It was at this race that the famous Denis O’Kelly remarked, “Eclipse first, the rest nowhere.” Eclipse won 18 races in his career and was never whipped or spurred. He went on to a distinguished career at stud, siring Pot-8-O’s who passed on his influence to such descendants as American Eclipse, Hyperion, Kelso, and Sea Bird. Today, more than 90% of all Thoroughbreds in the world can trace their lineage back to Eclipse, resulting in the predominance of the Darley Arabian line over the lines of the other two foundation stallions.

Matchem
Most racehorses are noted for their speed, but the speed often comes at the price of an excitable temperament, and even viciousness. Matchem was foaled in 1748 and was the grandson of the Godolphin Arabian. Besides speed, he supplied an excellent disposition to his descendants. The horse Snap was compared to the gentle Matchem: “Snap for speed and Matchem for truth and daylight.” (Snap was a grandson of the Darley Arabian.) When we consider Matchem’s blood heirs, we find many even-tempered yet fast horses. Matchem’s influence was not as widespread as his famous peers, but his offspring had a particular influence on American horses. Ten of Matchem’s descendants were brought to America by the owner’s son, Edward Fenwick, who immigrated to South Carolina in 1755. Brutus, one of Matchem’s sons, dominated racing in South Carolina for some time.