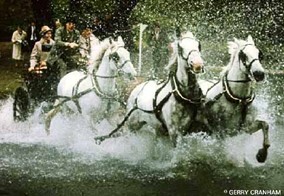 From the time of the founding of the Olympic Games in Ancient Greece in 680 BCE, equine events have been central to the competition. The Olympics were discontinued in Roman times when Asian invasions destroyed both the Empire and Olympia. In 1896, they were restored in Athens, Greece; but the first four revived Olympics did not include equine competition.

In 1912 in Stockholm, the horse once again became a part of Olympic competition through the vigorous efforts of Count Clarence von Rosen. The Olympic classes include individual dressage, team 3-day event, and individual and team jumping classes, with each nation entering a team of six riders.

Count Clarence von Rosen (1867 – 1955): Father of Modern Olympic Equestrian Competition
While equestrian events might never have returned to the modern Olympics without the diligent efforts of many prominent groups and individuals, perhaps the one person most responsible was Sweden’s Count Clarence von Rosen. Von Rosen was one of the most prominent sportsmen in Sweden prior to the 1912 games in Stockholm. He had long been associated with horses, having served in the Swedish Cavalry where he was selected for special training at the famed Spanish Riding School in Vienna. From 1889 through 1907 he was considered the most popular jockey in the country, winning 44 races in 132 starts.

The Olympics Today
In today’s Olympics, national teams are composed of four competitors in each of the three disciplines – stadium jumping, three-day eventing, and dressage. From 1912 to 1948 most equestrian competitors were cavalrymen. With the dissolution of most cavalry following World War II, civilian competitors became most prominent as evidenced by the Olympic Games held at Helsinki in 1952. Equestrian events are the only Olympic competition in which men and women compete on an equal basis. 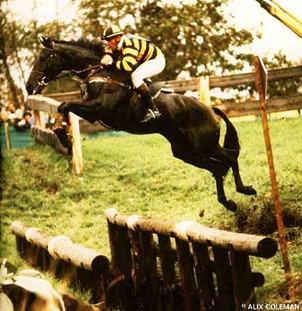 Driving a horse-drawn vehicle was once as much a part of everyday life as driving an automobile is today. Driving skills were the subject of study, practice, and refinement. At the turn of this century, organized driving competition gained popularity in both Europe and America. The 1901 International Horse Show at the Olympia in London included driving competition for singles, pairs, tandems, and teams of four, but is was not until 1970 that the American Driving Society established the rules governing competitive pleasure driving.
Competitive driving tests the skill of the driver and the training of the horse. There are three classes: presentation and dressage; marathon cross country; and obstacle driving. The rules for these competitions were originally drawn up in 1969 by Federation Equestre Internationale, the international governing body for all horse sports. Like many other equestrian sports, competitive driving has encouraged the pursuit of excellence in driving skills, breeding of horses for competition, and vehicle design. In 1988 competitive driving became a world championship sport. At present, competitive driving is not included in Olympic equestrian events.

The United States Equestrian Federation: From Humble Beginnings…
In January of 1917, Reginald C. Vanderbilt called a meeting of various horse shows to a conference at the Biltmore Hotel in New York City. The result was the creation of the Association of American Horse Shows.

By 1933 the number of horse shows had grown, along with the association’s membership and types of equestrian disciplines it governed. The organization adopted a new name, the American Horse Show Association, and in 1935 replaced the United States Cavalry Association as the U.S.’ representative with the International Equestrian Federation (FEI), the world governing body for international equestrian competition. During the 1936 Olympic Games, the AHSA joined the world stage of equestrian sport.

By 2004, USEF had more than 80,000 individual members, sanctioned more than 2,700 member competitions, supervised 100 affiliate organizations, and oversaw 26 breeds and disciplines of competition. The USEF’s U.S. Equestrian Rule Book has become the definitive guide to American equestrian competition. Their Drugs and Medications office serves as a cornerstone to the Federation?s regulatory process, is considered one of the world?s best.

The USET’s first Olympic team brought home two bronze medals in 1952. Since then, seven gold medals have been claimed by U.S. equestrian athletes. In all, U.S. competitors won 30 Olympic medals under USET’s guidance through the 2000 Olympics.