Rapid Western growth demanded a fast and reliable postal system. In 1860, the Pony Express was created to carry letters over a route of 1,966 miles between St. Joseph, Missouri, and Sacramento, California. The average trip took 10 days, with riders carrying only saddlebags containing mail and sidearms to fight off the Indians. A one-half ounce letter cost $5 to send by the Pony Express, and a mailbag would therefore be worth $3,200 in postal fees. At relay stations located every 25 miles, the rider picked up a fresh horse. The Pony Express horses were mostly tough Mustangs, some with a “dash” of Thoroughbred or Morgan in their blood. After only two years, the Pony Express was replaced by the telegraph and the railroad. In spite of its brief existence, the Pony Express played a flamboyant and significant role in the opening of the American West. 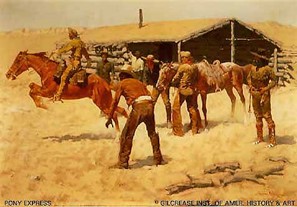 Before the Union Pacific Railroad penetrated the West in 1869, travelers to the West went by stagecoach. The journey from St. Louis to San Francisco required 25 days by coach, but few people had the stamina to travel continuously. (At that time, the trip by railroad from New York to St. Louis required only 2 days.) The rough territory demanded strong stagecoaches, many of which were the sturdy “Concord” coaches built by the Abbot-Downing company in New Hampshire. The typical stage coach was pulled by four to six horses, which were changed every ten miles. A stagecoach could cover up to 125 miles in one day.
An interesting description of stagecoach travel was written in 1872 by Mark Twain in his book, Roughing It:
Our coach was a great swinging and swaying stage, of the most sumptuous description – an imposing cradle on wheels. It was drawn by six handsome horses, and by the side of the driver sat the “conductor,” the legitimate captain of the craft; for it was his business to take charge and care of the mails, baggage, express matter, and passengers this trip. We sat on the back seat, inside. About all the rest of the coach was full of mailbags-for we had three days’ delayed mails with us…There was a great pile of it aboard, the driver said – ‘a little for Brigham, and Carson, and ‘Frisco, but the heft of its for the Injuns.’ We changed horses every ten miles, all day long, and fairly flew over the hard, level road. We jumped out and stretched our legs every time the coach stopped, and so the night found us still vivacious and unfatigued.