Horses of the Screen 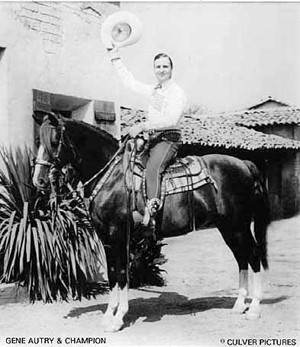 Beginning with the “Great Train Robbery” (1903), the “western” became one of film’s dominant themes and depended inevitably on the horse. The horses of the screen became as familiar as the heroes who rode them to fame and fortune: William S. Hart and Fritz, Tom Mix and Tony, Gene Autry and Champion, Roy Rogers and Trigger. Mention should also be made of the inimitable cousin of these horses: Francis the talking mule.

With the advent of television, another host of heroes entered: the Lone Ranger and Silver, Tonto and Scout, Hopalong Cassidy and Topper, as well as such individual stars as Fury, Flicka, and the sage, Mr. Ed. Like their human counterparts, horses in the movie world can be divided into three classes: The stars, the stunt horses, and the extras. The brilliance of a particular horse is based more on his training than on his breed or pedigree. Both star and stunt horses receive systematic schooling so that they will respond to their rider’s or trainer’s commands. They must be of even temperament since a film set is a bustle of equipment, bright lights, and unfamiliar sounds and faces. Horses on the set must respond to the trainer’s visual commands since verbal commands interfere with the recorded sound. Stunt horses must have the skill and courage to run over cliffs or crash to the ground from a full gallop. Stunt horses are carefully watched by members of humane societies to insure their safety. What appears to be a bone shattering crash on rocky ground is, in reality, a well-rehearsed fall on soft mattresses covered with plowed earth. Whether star or extra, the talented movie horses have a special place in the equine world. 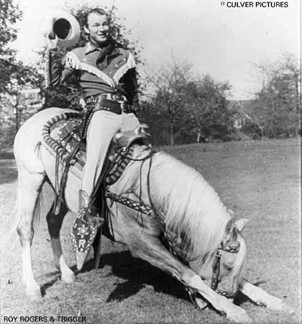 Rogers purchased Trigger in 1938 for $2,500. He was out of a Thoroughbred stallion and a Quarter Horse mare. Trigger’s striking gold coat with white mane and tail greatly helped to popularize the Palomino. In June 1965, Trigger died at over 30 years of age with more than 100 films to his credit.

Gene Autry and Champion
This honest, clean-cut, singing cowboy and his handsome horse were the heroes of all American children. There were three Champions, but the one that starred the most was a Tennessee Walking Horse. They made many personal appearance tours together. 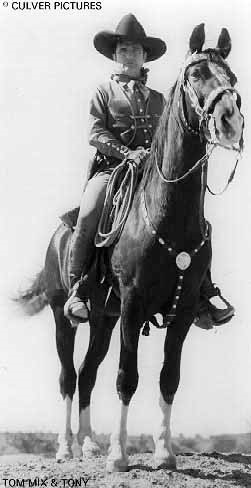