The Origins of the American Stagecoach 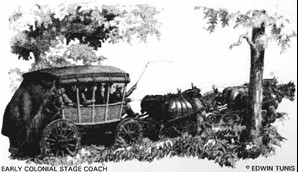 The first stagecoach in the American colonies was owned by Jonathan Wardwell of Boston. His coach first made the trip from Boston to Providence, Rhode Island, on May 13, 1718, and in doing so began a system of travel which would endure for nearly 200 years. Following Wardwell’s example, stagecoaches and wagons began to travel regularly throughout the East. The individual credited with instituting long-distance stage travel was another New Englander named Levi Pease. He began a stagecoach run along the upper Boston Post Road after the American Revolution in 1784. This stagecoach traveled from Boston through Worcester, Springfield, and Hartford to New York.

The Life of the Stagecoach Horses
The horses which pulled the stagecoaches in America lived a hard but rewarding life. They were usually treated with respect by their drivers and received excellent care and attention. Whereas a stagecoach horse in England lasted only three years at work, American horses lasted much longer. For instance, one horse working in California remained in harness for 15 years, and it is estimated that he logged a quarter of a million miles. A contemporary writer in the early 1800s gives a colorful description of stagecoach horses and their drivers:
“Every horse had a name. It was ‘Git up, Joe; gwan, boys or gals; you are shirky, Bill; you want touching up, Ben; if you don’t do better, Ben, I’ll swap you for a mule.? … Some drivers would fret a team to death while others would get over the road and you would never hear hardly a loud word to the team.”
The stagecoaches were largely replaced by the railroad in the East by the middle of the 19th century. The stagecoach, however, remained important for transportation in rural areas. Most isolated villages and hamlets were connected to the rail head and to the market place by the stagecoach until the 20th century.

Primitive Coach Construction
The vehicles used in the first days of stagecoach travel in America were not the elegant and comfortable Concord coaches such as those built by Downing and Abbot after 1827. Rather, the stagecoach of the 1700s looked more like a Conestoga wagon with plank seats. Charles William Jansen, in his book, The Stranger in America, described the typical American stagecoaches at the end of the1700s:
“…the American stagecoach, which is of like construction throughout the country, is calculated to hold twelve persons, who sit on benches placed across with their faces toward the horses. The front seat holds three, one of whom is the driver. There are no doors at the sides, the passengers get in over the front wheels. The first get the seat behind the rest, the most esteemed seat because you can rest your shaken frame against the back part of the wagon. Women are generally indulged with it; and it is laughable to see them crawling to this seat. If they are to be late, they have to straddle over the men seated in front of them.”
The only protection passengers had against the elements were leather curtains which could be drawn down to cover the sides. Travel in winter, if roads were passable, must have been a chilling experience, to say the least.

The “stages” of travel were marked by the numerous taverns located along the turnpikes and post roads. Taverns provided food and lodging for travelers, and stabling for the horses. They were traditionally named for famous persons who stayed there, and any number of taverns carried the names of Washington, Franklin, and Lafayette. These stagecoach stops were not only lodging and dining facilities, but were the principal gathering places for local people as well. Describing the typical tavern in colonial Massachusetts, Edwin Lasseter Bynner wrote:

“They were the centres of so much of its life and affairs, the resort at once of judge and jury, of the clergy and the laity, of the politician and the merchant; where the selectmen came to talk over the affairs of the town, and higher interests of the province; where royal governors and distinguished strangers were entertained alike with the humblest wayfarer and the meanest citizen; where were held the carousals of roistering red-coat officers, and the midnight plottings of muttering stern-lipped patriots; where, in time, the swaggering ensign of the royal army, the frowning Puritan, the obnoxious Quaker, the Huguenot refugee, and the savage Indian chief from the neighboring forest might perchance jostle each other in the common taproom."