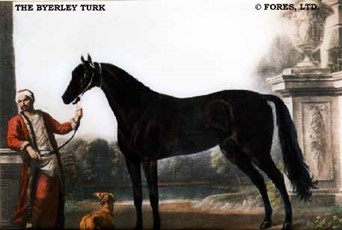 At the siege of Buda in Hungary, Captain Robert Byerley captured a horse from the Turks which would carry his name into history. The horse became known as the Byerley Turk and was the first of the three foundation stallions to come to Britain. Reputedly ridden by Byerley at the Battle of the Boyne in Ireland in 1690, this horse distinguished himself as a sire although he was not bred to many mares. In spite of his name, he was probably an Arab. The Byerley Turk founded a line of Thoroughbreds, the most distinguished of which was Herod, who was foaled in 1758, and proved to be a very successful sire himself.

The Darley Arabian
The second of the three foundation stallions to be imported to England was the Darley Arabian. He was foaled in 1700 and bought by Thomas Darley in Aleppo (Syria) in 1704. The horse was shipped to Yorkshire, England where he was bred to numerous mares. The most successful matings were with Betty Leeds, which resulted in two very important colts: Flying Childers and Bartlet’s Childers. Through the Childers line, the Darley Arabian was the great-great-grandsire of Eclipse who gained the description “Eclipse first, the rest nowhere.” The Darley Arabian is the most important of the three foundation stallions in terms on his influence of the Thoroughbred breed.

The Godolphin Arabian
The last of the foundation stallions to come to England was a horse possibly foaled in Yemen. After being shipped to Syria and then to Tunis, he was given to the King of France as a gift by the Emperor of Morocco. In 1730 he was imported to England by Edward Coke. After Coke’s death in 1733, his racehorses and broodmares were bequeathed to Lord Godolphin, and his stallions to Mr. Roger Williams. Later acquired by Lord Godolphin, the Arabian entered stud near Newmarket. Lord Godolphin bred the horse to several distinguished mares. Mated to Roxana, he sired Lath, the greatest racehorse in England after Flying Childers: and another mating of these two produced Cade, the sire of the great Matchem who carried on the line of the Godolphin Arabian. In 1850 it was remarked that “the blood of the Godolphin Arabian is in every stable in England."