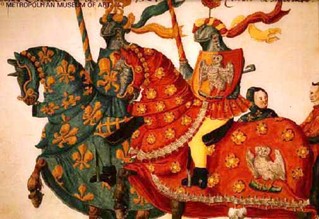 While there are many conflicting dates for the origin of the tournament, the Norman knights present at Hastings were well acquainted with the practice, which may have originated in France during the 11th century. The introduction of the couched lance (held under the arm) and the subsequent need to train knights to use the lance in unison had a significant effect on the tournament’s increased popularity during the 12th century.

These early tournaments had little in common with the elaborate events of later centuries. In their basic form, they were free-for-alls between groups of up to 200 knights, contested over miles of open land. The only formal limits were designated areas, fenced off as refuges, where knights could rest or re-arm, or where defeated foes could be held for ransom. There were virtually no rules governing tactics except that the primary object was to capture opposing knights for ransom.

The financial incentive of ransom was important for a knight’s participation. With a primogenitary system of inheritance (exclusive inheritance by the eldest son), second or third sons had to be concerned about their livelihood. For young men with military training and talent, the tournament could offer a source of income through a ransom, which often included the captured knight’s valuable arms, armor and warhorse.

From War to Sport

By the time Henry VIII met French King, Francis I on the Field of the Cloth of Gold in 1520, the crude tournaments of the 12th century had developed into solemn chivalric festivals, lavishly supported by kings and princes.

The “pas d’armes”or “passage of arms,” was one form of the tournament. Traditionally, an individual sent a proclamation to many different countries announcing that he would take on challengers at a certain time and place. The hosts for the pas were called tenants or holders. The challengers, who came from all over, were called venants or comers.

Rules of the Game

The tenants hung two shields from an elm tree, one designed as a symbol of war and the other as a symbol of peace. When a venant approached, he would touch the “peace” shield if he wished to joust with a blunt lance (or “courtesy lance”) or he would touch the “war” shield indicating a pointed lance. Once a challenge was accepted, the venant was inspected by a heraldic expert to ascertain that he was a knight of honorable standing. If the venant chose, he could fight on foot with a sword or an ax and also fight from a horse. Once a challenge was made, the venant was treated with lavish hospitality based on the motto “ce que vouldrez,” meaning “whatever you like.”

The horse in the tournament usually had a tent for a stall and was given very good care by his groom. Horses were draped in flowing cloth, called a caparison, which was patterned according to its owner’s heraldic signs. An iron face shield, called a chanfron, protected the horse’s head in case it was hit by a lance or sword. The horse in a joust “ambled” (paced) to give the knight a smooth ride and a better aim with his lance. The pas d’armes was a grand pageant for both man and horse.

Chivalry, and the sporting events associated with it, gave rise to a complex body of customs and behavior. The innovations in equipment associated with the knight and his horse were similarly complex.

The knight’s spurs had long necks since he rode with his legs extended. The long neck allowed the rowel, the sharp, circular element, to reach the horse’s flanks. Ornate spurs were bestowed on a young man in a colorful ceremony to symbolize his readiness for chivalric feasts. The material of which spurs were made also indicated the owner’s rank: a knight’s spurs were gold, a squire’s silver, and a man-at-arm’s iron or brass.

The knight’s horse was usually covered with a large ornate cloth called a caparison. The ornamental designs on the caparison corresponded to the knight’s heraldic patterns, and served as a form of identification. In one form of the joust, the horse was blindfolded to keep him from shying. He wore a huge cushion stuffed with straw around his chest and shoulders. This cushion protected the horse and the knee and legs of the knight in case of a collision.

The Bit and Bridle

The destrier required firmness for him to respond in the intensity of battle. Bits used on destriers had long cheek pieces or shanks and high ports since these would provide greater leverage on the curb which exerted pressure on the horse’s mouth. The reins were covered with metal plates to protect them from being cut by an opponent’s sword.

Stirrups were essential to help the rider remain on the horse and also to give him greater stability and leverage when swinging his sword or thrusting with his lance.

The high-backed saddle used by knights in warfare and jousting gave the knight greater leverage and kept him in his seat when he charged his opponent. The impact of the lance, which was up to 15 feet in length, could be immense due to the weight of the destrier propelling it forward.